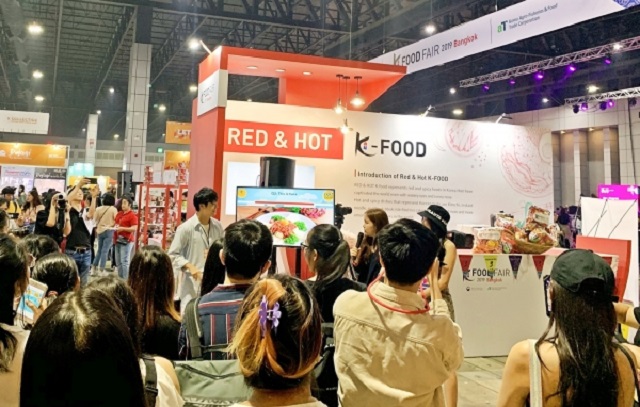 A Korean food exhibition hosted by the Korea Agro-Fisheries & Food Trade Corporation in Thailand draws a large number of visitors. (image: aT)

SEOUL, Aug. 27 (Korea Bizwire) — South Korea’s exports of foodstuffs to Thailand rose 14.7 percent in the first half of 2020, data showed Thursday, on the back of rising demand for ready-to-eat products amid the new coronavirus pandemic.

Outbound shipments of foodstuffs to the Southeast Asian country reached US$112 million over the January-June period, according to the Korea Trade-Investment Promotion Agency (KOTRA).

Over the period, South Korea’s overall exports to Thailand tumbled around 20 percent to reach $3.18 billion.

KOTRA said South Korea was able to ship more foodstuffs as people purchased more instant foodstuffs as they refrained from going outside amid the COVID-19 pandemic, with at least 24 million infected around the globe.

South Korea’s exports of instant noodle products to Thailand increased 43.4 percent on-year in the first half, with those of cooking sauces also advancing a whopping 89.7 percent, according to KOTRA.

The rising popularity of South Korean entertainment content has also pushed up demand, it added.

Foodstuffs have been considered one of the new growth engines for South Korean exports, as the COVID-19 pandemic has dealt a harsh blow to sales of key items such as automobiles and petrochemical products.

South Korea’s exports extended their slump to a fifth consecutive month in July by falling 7 percent on-year amid the fallout of the new coronavirus.

But exports of computers shot up a whopping 77.1 percent as more people worked from home. Shipments of foodstuffs increased by 9.6 percent as well.