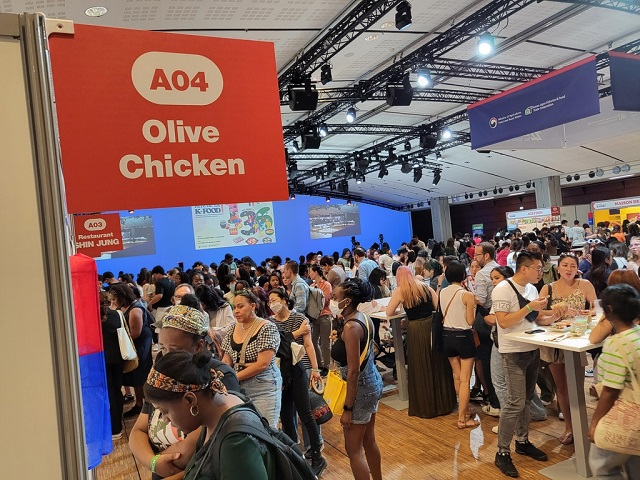 People visit the K-Food Fair organized by the Korea Agro-Fisheries and Food Trade Corp. in Paris, in this file photo taken July 9, 2022. (Yonhap)

Outbound shipments of agricultural and fisheries goods came to US$9.11 billion in the January-September period, representing the largest-ever tally for the period so far, according to the data by the Korea Agro-Fisheries and Food Trade Corp.

The country’s exports of agro-fisheries goods surpassed $10 billion for the first time last year, and this year are widely expected to beat the record, according to its officials.

They were led by the growing popularity of instant noodles, dried seaweed and processed rice products, among other items, they added.

On Friday, the aT held a meeting with major exporters in the sector and discussed measures to further boost overseas demand.

The agency plans to carry out various events to promote K-food in countries that are major customers, as South Korea is set to ship a wide range of fruits and other fresh products in the fourth quarter.

It also vowed to come up with tailored measures to support exporters with longer-term perspectives in cooperation with the central government.