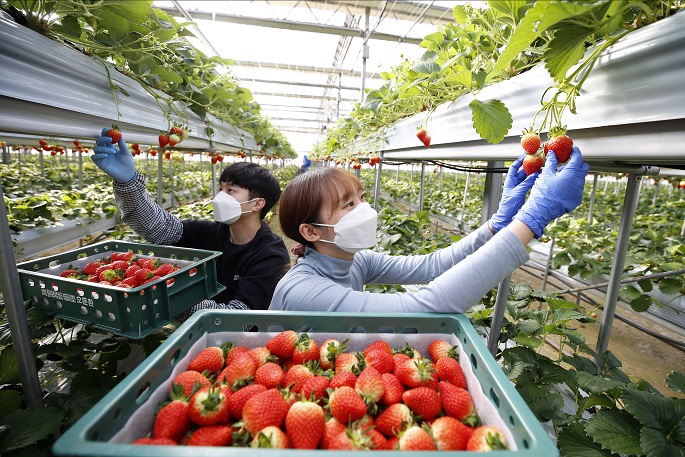 Farmers pick strawberries at a farm in Imsil, 300 kilometers south of Seoul, in this file photo provided by the town on Jan. 25, 2021. (Yonhap)

SEOUL, July 6 (Korea Bizwire) — South Korea’s exports of agricultural products shot up to set a new record in the first six months of 2021, data showed Tuesday, on the back of stronger global demand for healthier foodstuffs amid the new coronavirus pandemic.

Outbound shipments of such goods in the January-June period came to US$4.15 billion, up 15.4 percent from a year earlier, according to the data compiled by the Ministry of Agriculture, Food, and Rural Affairs.

Exports of fresh products advanced 11.4 percent over the period to reach $717.8 million, and those of processed foodstuffs jumped 16.2 percent to $3.4 billion over the period.

By destinations, the ministry said shipments to countries with aggressive vaccine rollout programs, such as the United States and China, increased sharply on strong demand for drinks, snacks, and sauce products.

Countries suffering from an uptick in virus cases, on the other hand, purchased more ready-to-eat products and healthy foodstuffs, such as kimchi.

Shipments to Southeast Asia moved up 28.2 percent to hit $936.7 million, leading the overall gains. Exports to Japan also edged up 5.4 percent to $698.7 million.

Among fresh products, exports of ginseng gained 25.2 percent on-year to reach $120 million over the first half, and those of kimchi rose 20.1 percent to $86.8 million. Shipments of strawberries added 25 percent to $48.9 million.

In terms of processed foodstuffs, exports of noodles moved up 9.5 percent to $432 million, and those of snacks climbed 15.3 percent to $282.5 million, the ministry added.

Over the first six months of 2021, South Korea’s combined exports increased 26.1 percent to $303 billion, setting a new record for any first-half period.