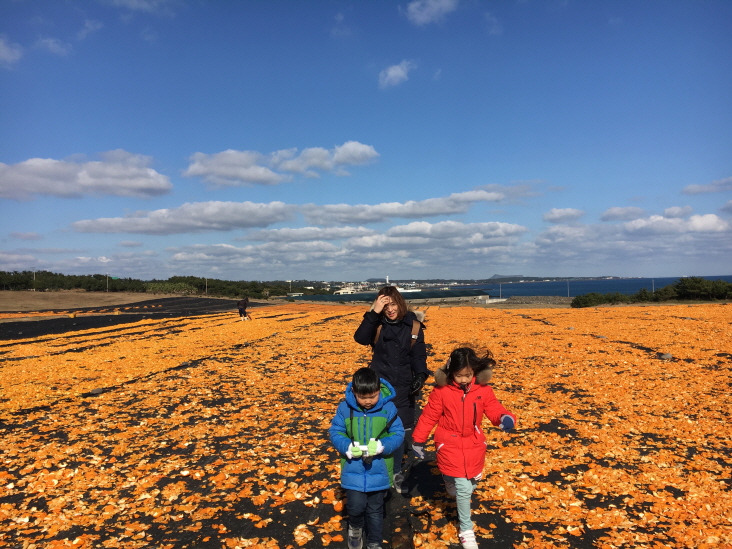 Lee Na-hyeon and her two children walking in a field of tangerine peels laid out to dry at the Sincheon Ranch, Seogwipo, on Jeju Island during their monthlong stay in January 2017. (image: Lee Na-hyeon)

SEOUL, Jul. 19 (Korea Bizwire) — The staple “chop, chop” dynamic or “ppali ppali” (“hurry” in Korean) culture in modern Korea is hardly an exception when it comes to traveling.

Going on a trip somewhere, whether local or abroad, still connotes a rushed schedule of visiting as many places as possible during a weeklong holiday for the average Korean.

It’s no wonder travel agencies have touted how many destinations they offer in one single tour package, trying to lure customers with typical catch phrases like “Conquer Europe in nine days!” and “Complete trip around western U.S. and Canada!”

Lee Na-hyeon, a mother of two from Seoul, is among those who bucked the trend.

At the height of last year’s winter, she flew with her two children — nine and seven — to the southern resort island of Jeju and lived there for a month.

“I heard about how good it was from a friend of mine, and it was kind of a spur-of-the-moment decision when my parents-in-law suggested coming with them,” the 37-year-old office worker said. “I thought, why not, when would me and my kids ever get a chance like that, and the timing was good because I’ve been on leave.”

She stayed in an apartment that her in-laws rented in south central Seogwipo, a city on the island’s southern part, a slightly unique accommodation since most travelers staying for a month on Jeju rent a house or resort lodge. Her husband came to stay with them every weekend.

And for the 30 days they were away from all mundanities, they enjoyed the serenity of Jeju life, embracing every inch of the neighborhood and surrounding area from freezing beaches and a snowy Mount Halla — the highest mountain in South Korea — to deserted tourist hot spots, tasty restaurants and cozy cafes.

“I did have plans for the trip, a list of places to go, but the most memorable parts came from the ones we decided on the spot,” Lee said. She recalled an unplanned venue of stumbling on the Citrus Museum and how her kids fell in love with the firsthand art-and-play time with tangerine peels.

Lee drove around 1,500 kilometers in total during the stay.

“My husband told me that’s about the same as going to Busan from Seoul and back and forth nearly five times,” she laughed.

There are no official data yet that show the growing trend or actual number of extended-stay travelers in Korea. But plenty of secondary sources reflecting the popularity are not so hard to miss.

A search for monthlong stays on Jeju on Naver, the biggest Internet portal, immediately returns over 3,500 blog posts. Of those, some 1,700 posts were only created within the last year. A search with the hashtag #monthlong stay on Instagram leads to more than 11,330 postings. 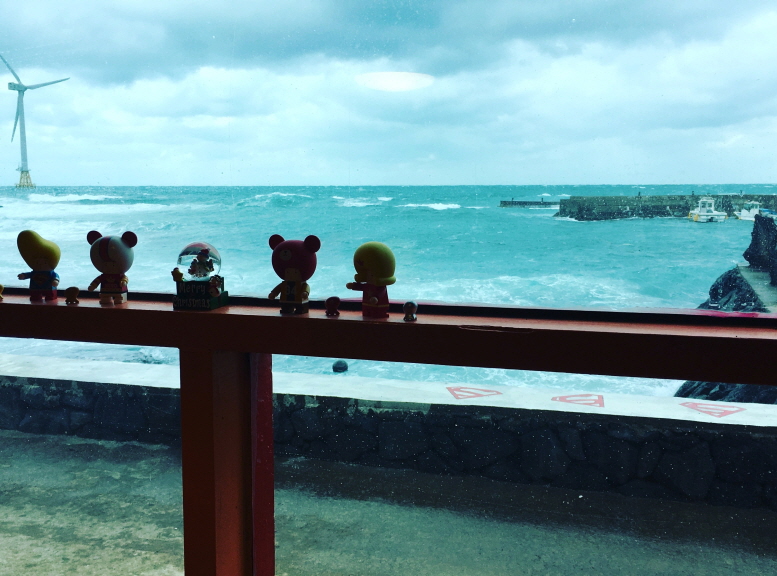 A winter view of the sea on the eastern coast of Jeju Island in January 2017. (image: Lee Na-hyeon)

Cho Mi-kyung, a researcher at the Jeju Tourism Organization, said her team has recently received a number of calls from media and other outlets inquiring about statistics related to monthlong travelers.

“It would definitely be our job if a project was launched regarding the extended-stay travelers on Jeju,” she said.

In step with the trend, travel agencies have been redecorating the front pages of their websites with “weeklong stay” offers, limiting the destinations to less than a couple per package.

The Korea Tourism Organization has opened up applications until Sunday for two extended travel programs. One is spending a week on a remote mountain or in a fishing village in the country, while the other offers a 90-day trip to a desired destination.

Experts attribute the shift in the traveling trend to a change in people’s lifestyles, one that puts an emphasis on keeping a balance between work and private life. The July 1 implementation of a new law enforcing a shorter workweek has also given a fresh impetus to the phenomenon.

“We now have a stronger desire to live a happy life, enjoy culture and entertainment. It’s a choice that we make for our own contentment, which maximizes the psychological satisfaction,” said Koo Jeong-woo, a sociology professor at Sungkyunkwan University.

Destinations are not confined to local regions. Demand is growing for foreign cities as well, such as Sydney, Guam and Quebec, although many of these cases are intended for children’s English education rather than the sole purpose of living and traveling.

The extended-stay trend for singles and younger generations involves spending at least one week in one or two cities that are less well-known.

A recent survey by HotelsCombined showed 68.5 percent of 1,000 respondents aged between 25 and 35 said they consider three to five days ideal for a holiday getaway, sharply up from 56.9 percent a year ago.

Those who are planning a trip of over a week accounted for 21.5 percent, up from 19.7 percent last year.

Another poll by Expedia revealed that travelers want their trips to be no different from daily routines. They would prefer going for a stroll in the neighborhood or going to a cafe for a cup of coffee, as opposed to touring landmark attractions and keeping themselves busy taking pictures.

Kang Ji-young, 29, will fly to Prague this summer with her boyfriend, her first getaway since she got a full-time job. Over their four-night stay, that is the only place the couple will be staying.

“I think it’ll be refreshing, not only that it gives us time to take things slow but to explore a place so famous and yet so strange to us,” she said. “That itself already means a lot to me, and I’m excited to be wandering around and getting lost in the city with the person I love.”