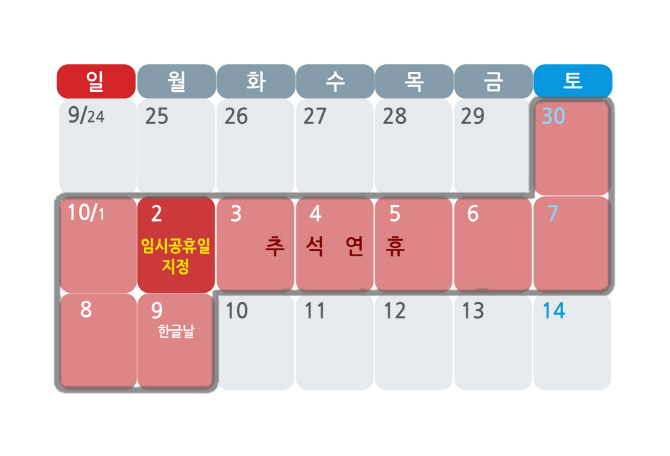 The government designated Oct. 2 as a one-off holiday to bridge the weekend to make it possible for workers to take 10 consecutive days off. (Image: Yonhap)

SEOUL, Sept. 6 (Korea Bizwire) – People will have to pay upwards of 50 percent in additional charges when they go to hospitals or drug stores during the Chuseok holiday starting late this month, the Ministry of Health and Welfare said Wednesday.

The government designated Oct. 2 as a one-off holiday to bridge the weekend to make it possible for workers to take 10 consecutive days off.

The higher rates are applicable beginning on the Sept. 30 weekend and run through the three-day Chuseok holiday and Oct. 6, designated as an alternative holiday, before finishing Oct. 9, which commemorates the invention of the Korean alphabet Hangeul.

Additional charges ranging from 30 percent to 50 percent are applied in accordance with relevant government regulations, which require people to pay more while using medical facilities and drug stores during holidays and nighttime.

The rules require patients to pay 30 percent of additional charges when they consult doctors and get medicine at drug stores.

The 50 percent extra charges will also be levied on those who are treated at emergency rooms at hospitals during holidays or at night.