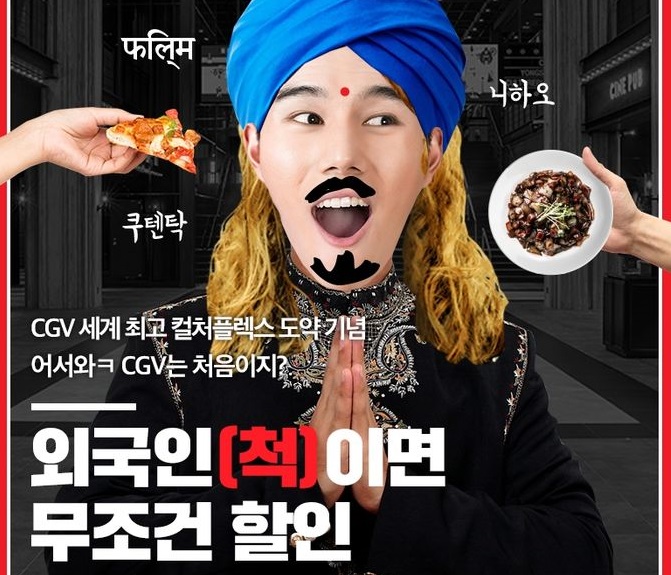 SEOUL, Mar. 29 (Korea Bizwire) — CJ CGV, South Korea’s largest multiplex chain, has come under criticism for a promotional event that asks customers to dress and speak like “foreigners” for discounts, with many voicing concerns that it could potentially prompt borderline racism.

The world’s fifth-largest multiplex theater company announced Wednesday that it will offer discounts for customers who purchase tickets on-site by speaking non-Korean languages or dressing up in “foreign” attires on Sunday for its annual April Fools’ Day event.

The company offered a vague guideline through a website produced in a tongue-in-cheek fashion, featuring a person of Northeast Asian ethnicity edited with long blond hair, a mustache and goatee, a red bindi and a turban.

It said theaters will not recognize profane language or extremely casual efforts, such as wearing earrings or shoes bought from overseas, although customers speaking in indistinguishable “extraterrestrial” languages will be accepted.

After the event was announced, many lashed out at the company over social media, claiming that the event could lead to borderline racism, especially among the expat community.

“What is funny about being a foreign person? Speaking a foreign language is good, but dressing as a foreigner is not good. People are not costumes. Cultures are not costumes. This is a bad idea,” Ariel Campbell, an American who teaches English in Bucheon, west of Seoul, wrote on CGV’s Facebook post promoting the event.

Danny Jones, an English professor in Busan, also expressed reservations about the event.

“It’s okay, only so long as it shows appreciation and admiration of other cultures. But if it results in mockery or stereotyping, of course that would be wrong,” Jones said.

Many South Koreans also relayed concerns over social media. “I can’t even imagine the amount of stereotypical behavior that will come out from the event,” Yoo Jung-han, a college student in Seoul, said via her Twitter account @vnfmsahfo486.

Twitter user @EngBreakfastTea wrote an email complaint to CJ CGV’s customer center and shared the response online. The CJ CGV staff who wrote back acknowledged the user’s misgivings but asked the customer to not misunderstand the event planned with “good intentions.”

Others pointed out how CJ CGV’s marketing is out of line with the growing awareness towards diversity and political correctness and how one’s race or ethnic background no longer dictates nationality in most advanced nations.

“A person who does not look Asian can in fact have a Korean nationality. The person can identify him or herself as Korean. Isn’t this a mis-marketing?” Shin So-young wrote on Facebook.

Offensive depictions of other races and cultures, however inadvertent they are, have not been uncommon in South Korean pop culture. In July of last year, MBC TV apologized after being criticized for misrepresenting Islamic culture in its drama, “Man Who Dies to Live,” in a way that many deemed disrespectful. SBS TV also received flack for airing a comedy skit with a female comedian who seemingly depicted native African tribal culture in a crude manner.

A public relations representative at CJ CGV said the planning of event was never intended to stoke racism.

“If people feel that way then we might have to reconsider the event. But that was never our intention,” the representative said.