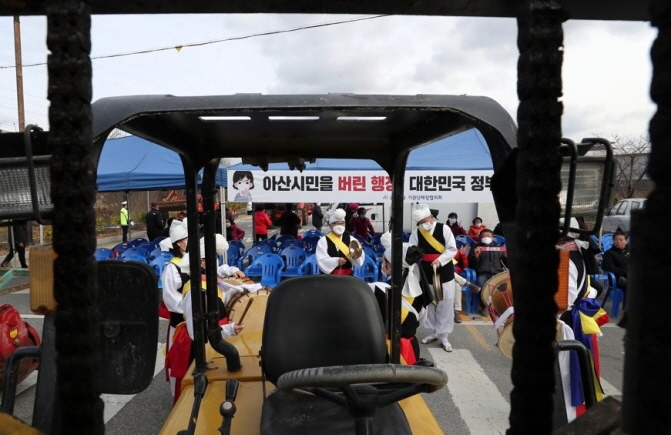 Residents of Asan, South Chungcheong Province, stage a sit-in on Jan. 29, 2020, after blocking the entrance of the Police Human Resources Development Institute with farming machines to protest the government’s decision to send South Korean evacuees from Wuhan, China, to the state-run facility. (Yonhap)

The government said it will send about 700 South Korean nationals arriving from Wuhan to the National Human Resources Development Institute in Jincheon, North Chungcheong Province, and the Police Human Resources Development Institute in Asan, South Chungcheong Province. Jincheon is 90 kilometers southeast of Seoul, while Asan is a similar distance south of the capital.

The Korean evacuees will land at Gimpo International Airport, western Seoul, from Wuhan — the epicenter of the new coronavirus — in the Chinese province of Hubei, Thursday and Friday, before being bused to the two state-run facilities to be kept in quarantine for two weeks, it said.

Previously, the Seoul government had pushed to send the South Korean residents of Wuhan to two public facilities in Cheonan, South Chungcheong Province, but gave up after opposition from the city’s residents.

The two new candidate facilities in Jincheon and Asan, both close to Cheonan, are normally used for training civil servants and police officers. The dormitory at Asan’s police facility can accommodate 1,200 people.

But the government’s plan faces hurdles, as residents in both Jincheon and Asan have also put up strong resistance.

About 60 residents of Asan began a sit-in protest after blocking the entrance to the police development institute with five farm machines, including tractors and cultivators. 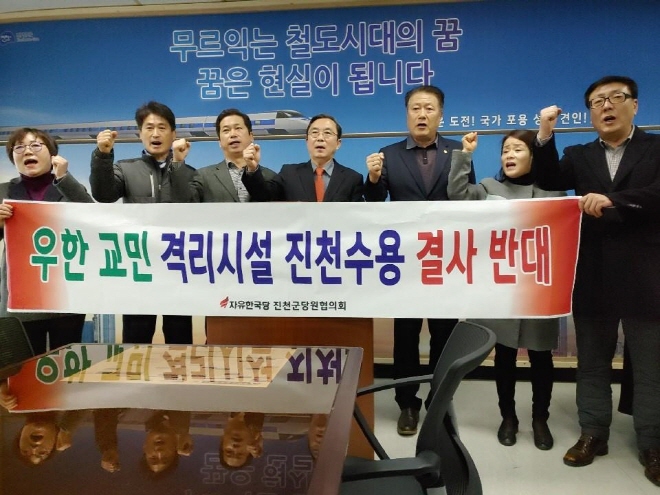 “We cannot accept the government’s decision, as it has changed the initial location of temporary camps for Wuhan evacuees from Cheonan to Asan due to protests from Cheonan residents,” said one of the protesters, calling for safety measures for Asan residents.

Asan’s municipal council held an emergency session and decided to stage a campaign against the government’s decision.

“The police facility in Asan is not suitable for a camp for Wuhan evacuees, as it is surrounded by apartment complexes,” said Rep. Lee Myung-soo of the main opposition Liberty Korea Party.

A similar atmosphere of resistance exists in Jincheon, where a group of 30 residents blocked the entrance of the National HRD institute with tractors.

Jincheon’s county government, council and residents have all denounced the government’s decision as “inappropriate,” noting 17,237 residents in 6,285 households live within a 1 kilometer radius of the HRD institute.

“From a broader perspective, it is OK to accept Korean evacuees from Wuhan. But we cannot accept it if the location has been changed from Cheonan due to protests from the city,” Jincheon Mayor Song Ki-sup said.

Jincheon’s county council also called for a review of the government’s decision.