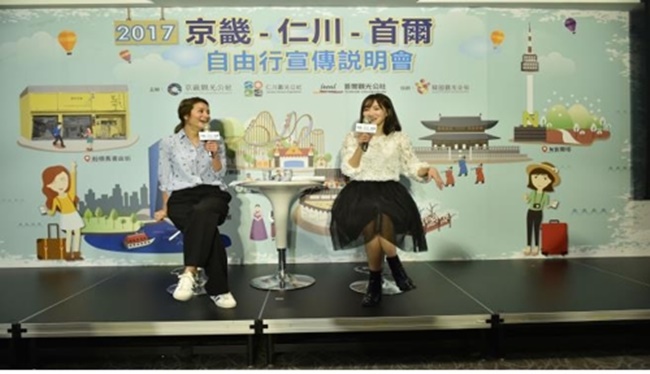 Last weekend, the local governments were in Taiwan holding a promotion event about South Korea’s tourism from a different angle. (Image: Yonhap)

SEOUL, March 28 (Korea Bizwire) – Seoul and its neighboring districts Incheon and Gyeonggi are teaming up in an all-out effort to attract foreign tourists from countries like Taiwan and India, as part of efforts to revive tourism amid the recent Chinese economic retaliation over South Korea’s deployment of a THAAD missile defense system.

As the Chinese government continues to ramp up its efforts to disrupt the South Korean tourism industry, three of the biggest cities and districts in the country are shifting gears and focusing on attracting more tourists together rather than competing against each other.

The collective move is the latest in a series of efforts by South Korea to reduce its reliance on Chinese visitors in tourism and look to new markets to avoid any possible politically driven retaliation similar to what the country has experienced recently with China.

Off the back of the collective resolution, the three local governments of Seoul, Incheon and Gyeonggi Province are holding an “India MICE Roadshow” at the Taj Palace Hotel in New Delhi tomorrow, a promotion event showcasing what the cities can offer to Indian visitors.

With MICE being an acronym for meeting, incentive, convention and exhibition, the Seoul government is set to announce its plans to offer convention centers and art galleries as venues for business conferences.

Incheon Metropolitan City will be promoting its convenient location and transport from the world-famous Incheon Airport as well as tour packages which will allow business conference participants to enjoy the view of islands off the coast of the city from a cruise ship.

Gyeonggi Province will be plugging resort tour programs in the region.

Last weekend, the local governments were in Taiwan holding a promotion event about South Korea’s tourism from a different angle.

Given the popularity of Korean dramas, the promotion event targeted independent travelers, focusing on showcasing the locations from the popular Korean TV show Guardian: The Lonely and Great God including Bukchon Hanok Village, Unhyeongung Royal Residence and the Baedari Bookstore Alley.

This year is the first time that three administrative districts are working shoulder to shoulder, after officials realized that all cities can benefit from being cooperative in the face of Chinese travel bans.

The Seoul Capital Area, also known as ‘Sudogwon’ in Korean, contains Seoul, Incheon, and Gyeonggi-do, and with a combined population of more than 24 million, ranks as the fourth-largest metropolitan area in the world.