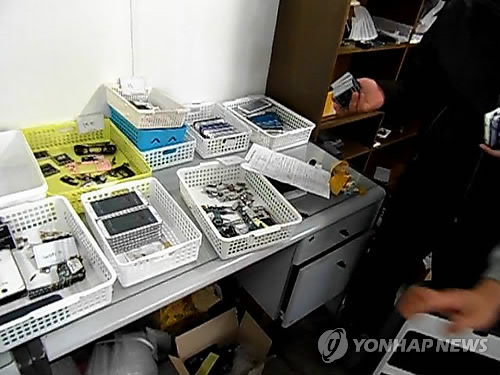 Busan’s Metropolitan Police Agency announced on March 18 that it indicted the 14 member criminal group led by a man surnamed Song without detention, on charges of obstruction of business by making 1,200 fake Samsung smartphones.(image: Yonahap)

SEOUL, March 19 (Korea Bizwire) – South Korean police have exposed a group of manufacturers and distributors of fake Samsung smartphones made in Korea for the first time. It is commonly known that fake smartphones are typically made in China, and distributed to other Southeast Asian countries.

Busan’s Metropolitan Police Agency announced on March 18 that it indicted the 14 member criminal group led by a man surnamed Song without detention, on charges of obstruction of business by making 1,200 fake Samsung smartphones.

Using the parts and displays, Song’s group manufactured some 1,200 Galaxy S3 and Galaxy Note2 smartphones and distributed them to smartphone retailers in the Busan area. The manufacturing cost per fake smartphone was 150,000 won, and the group sold them for 250,000 to 300,000 won to the retailers, who resold them to customers at prices around 800,000 won.

According to police, the fake smartphones are not easy to distinguish from authentic ones. Although they only reached about 40 percent of the authentic phones performance, elderly people had no trouble using the fake phones.

Meanwhile, police have discovered other cases where fake Chinese smartphone parts were distributed in Korea, and are expanding their investigation into the issue.

An official from the Busan police agency said, “In the past, fake smartphones were manufactured in China, but this case proves that they are now being made in Korea too. We will thoroughly investigate the matter and prevent further damages to customers.”