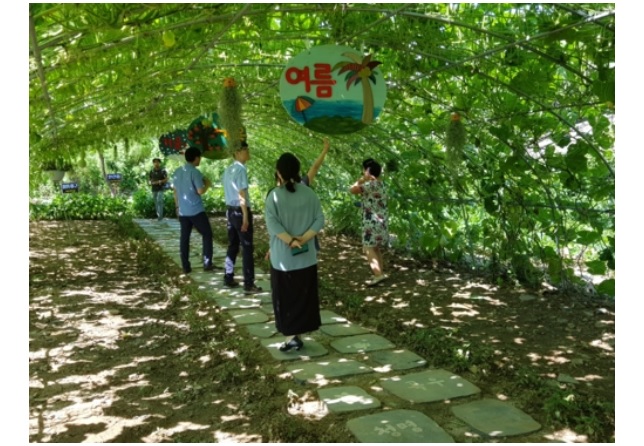 The shelters, which were in service in 271 towns in 2014 and expanded to 392 last year, before being reduced to 350 to choose substance over appearance. (Image:North Gyeongsang Province)

In addition, deserted houses have been transformed into gardens with pumpkins and medical herbs, and the walls on the way to the houses have been painted with vivid imagery, creating ‘cognition alleys’.

North Gyeongsang Province has been operating what it calls a ‘Beautiful Shelter for Dementia’ in each village since 2009 as part of efforts to prevent dementia and slow down its progression.

The shelters help patients to resume their daily life with cognition-strengthening training and other activities such as tending vegetable gardens, and at the same time offer consultation service to their families. Those with less serious symptoms are helped to slow down the pathological progression.

The shelters, which were in service in 271 towns in 2014 and expanded to 392 last year, before being reduced to 350 to choose substance over appearance.

According to a survey conducted by the province on August 11 of 1,338 patients, it turns out that the shelter has proved effective in improving the cognitive function and emotional state of dementia sufferers.

For time and location perception and memory faculties, the shelter participants’ cognitive function increased from an average of 19.26 points to 20.30, an improvement of 1.04 points, while the figure for non-participants decreased by 0.24 points from 16.07 to 15.83.

Regarding dementia severity, the participants improved by 0.05 points on average while non-participants’ worsened by 0.01 points.

“The elders who participated in the shelter for dementia have gotten better in the fields of cognition function, illness severity, and emotional state,” said an official from the province. “We will keep finding more effective measures for dementia patients to return to their normal routines.”