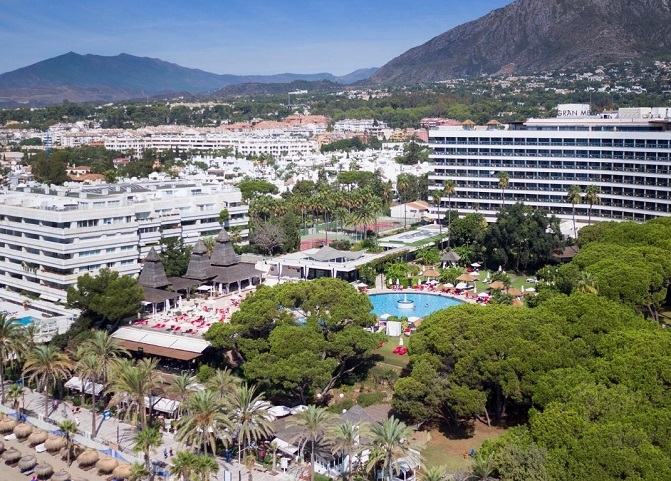 Until now, it has proven almost impossible for most IP franchises to rapidly deploy across media content, consumer products, and hardest of all, themed location-based entertainment, all at once.

The new enterprise, supercharged by a joint venture with Meliá Hotels International, will be the only vertically-integrated entertainment powerhouse able to simultaneously activate an intellectual property across the full transmedia spectrum — with the potential to transform the $440 billion hospitality and entertainment category.

Meliá, the world’s #1 leisure hotel group with 390+ properties in 40 countries, many in prime beach destinations, is jointly developing theme park + resort combos with Falcon’s Beyond at flagship properties on multiple continents.

Expanding and Evolving the Katmandu IP

A first major focus of Falcon’s Beyond will be to apply its IP Expander™ model to the rapid evolution of its original and wholly-owned “Katmandu” IP—already popular with the millions of Europeans who have visited Sol Katmandu Park & Resort in Mallorca, Spain, and a growing list of Katmandu-branded kids camps in Meliá’s Sol Hotels.

Along with new characters, a streaming video series, and merchandise, the proven Katmandu IP will undergo a brick-and-mortar expansion. Through unique technological capabilities, Falcon’s Beyond will establish Katmandu as the first world-class theme park to have every ride and attraction customized to a centralized story “like chapters in the same legend,” and digitally tied to individual guest experiences.

Development is moving forward on additional Katmandu parks on the grounds of Meliá resorts in Punta Cana, Dominican Republic, Tenerife, Spain and other key tourist destinations.

“Falcon’s Beyond Global represents the ultimate combination of unlimited storytelling potential, agile and flexible real estate scalability, and imaginative expansion into a multitude of categories,” said Cecil D. Magpuri, CEO of Falcon’s Beyond Global and founder of the original Falcon’s Creative Group. “We develop inclusive, story-driven experiences that we can bring to market with unprecedented speed, removing all the massive challenges IP franchises and developers face when attempting this feat on their own.”

“We are truly enabling the impossible,” said Scott Demerau, Executive Chairman of Falcon’s Beyond Global and co-founder of Katmandu Group. “Through our partnership with Meliá, we have created a new playbook for building cost-effective, ‘Big-Experience, Small-Footprint’ theme parks, from beach resort communities to mixed-use entertainment spaces. Falcon’s Beyond Global brings a full complement of technology, design, and media expertise to the equation. Together, we are offering something that’s simply never been accessible to companies before. This is a huge benefit to developers, emerging IPs, and even entertainment giants.”

Meliá Hotels and Katmandu Group originally came together in a 2012 joint venture to launch the themed Sol Katmandu Park & Resort in Mallorca and complement the beach holiday experience by providing “entertainment with rooms.” Their proof-of-concept rocketed to the top of the Meliá Sol portfolio and was named in the European Hospitality Awards as the #1 hotel in Europe for innovation in service, out of more than 100,000 hotels. Trivago Global named the park + resort as the #1 Hotel in Spain for Traveling with Kids. TripAdvisor named Katmandu Park in the top 3 parks in Spain three years in a row, and as a Travelers’ Choice Best of the Best 2020.

Falcon’s Beyond will elevate this unique, proven model of “Big-Experience, Small-Footprint” theme parks for Katmandu and other IPs around the world, leveraging the joint venture with Meliá, whose global operating presence enables growth in any tourism destination across the Americas, Europe, Asia, and beyond. The rights to additional important IPs have already been secured, and Falcon’s Beyond is in discussions with others to deploy complete transmedia expressions at unheard-of speeds. The company has worked on master planning and design projects totaling over $100 billion and won numerous design awards for its world-class attractions and experiences.

Falcon’s Beyond delivers a revolutionary alternative.

Falcon’s proprietary rides and attractions are world-class, cutting-edge, story-driven, and the first of their kind. Its patented technologies are uniquely able to create mega-park experiences in “Big-Experience, Small-Footprint” parks — which leverage underused land on existing resorts in dense tourist hotspots. Falcon’s Beyond parks can be deployed in as little as a 24-36 month window at a tiny fraction of the cost of a mega park, with Falcon’s providing expert, ongoing operations.

“Meliá is committed to bringing extraordinary experiences to our guests around the world,” said André Gerondeau, Chief Operating Officer of Meliá Hotels International. “Katmandu-themed parks and resorts will be a vital part of our story moving forward, and we feel this initiative puts us five years ahead of the rest of the hospitality industry in delivering ‘entertainment with rooms.’ Everyone at Meliá is thrilled to be working with the creative minds and experienced development experts at Falcon’s Beyond.”

“Falcon’s Beyond and its unprecedented, imaginative, and already-deployed IP activation model completely shifts the established entertainment industry paradigm,”  said industry leader Ken Faier, founder of Epic Story Media, a full-service, creator-driven kids entertainment company.  “We have seen first-hand what Falcon’s is creating and we are really excited to explore an epic collaboration. There is a big demand for families looking for exciting experiences around great IP.”

With its expertise in intellectual property expansion, licensing, and immersive experiences, Falcon’s Beyond Global has unprecedented power to turn imagined worlds into reality — inspiring wonder in audiences and guests, with memories to last a lifetime.

About Meliá Hotels International
Founded in 1956 in Palma de Mallorca, Spain, Meliá Hotels International (MHI) has more than 390 hotels open, or in the process of opening, in more than 40 countries. They operate under the brands Gran Meliá Hotels & Resorts, Paradisus by Meliá, ME by Meliá, Meliá Hotels & Resorts, INNSiDE by Meliá, Sol by Meliá, and TRYP by Wyndham. The company is a global leader in resort hotels, and its resort experience has allowed it to become a leader in the growing market of urban hotels inspired by leisure. The Sustainability Yearbook 2020, published by S&P Global, named Meliá among the Most Sustainable Hotel Companies in the World (Silver Medal), and it has been included among Europe’s Climate Leaders 2021 by the Financial Times & Statista. Meliá Hotels International is also a member of the IBEX 35 and is the Spanish hotel company with the best corporate reputation, per Merco Ranking. For more information, visit www.meliahotelsinternational.com

A photo accompanying this announcement is available at https://www.globenewswire.com/NewsRoom/AttachmentNg/77a4b0cf-859f-4c92-b5c4-8e95f66ea4f6