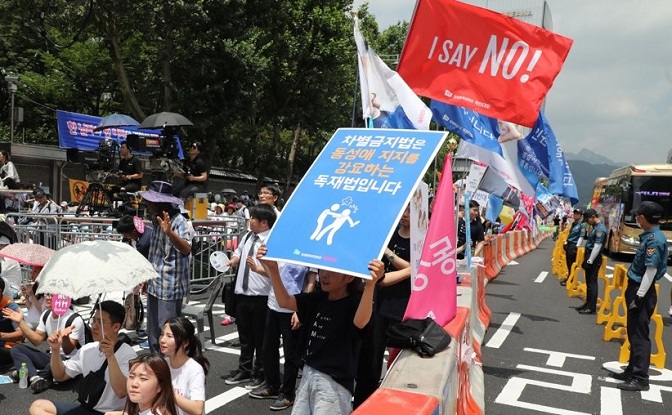 Representatives at the National Assembly in charge of submitting or processing bills related to human rights protection are constantly hindered by these groups, who call the bills ‘legislation for homosexual heaven in South Korea’.

The office of Rep. Jang Hye-yeong from the minor opposition Justice Party, who submitted a new bill on preventing discrimination on June 29, received more than 100 phone calls each day, most of which were complaints from radical conservative Christians.

The far-right Christian groups shared the contact information of nine representatives who jointly submitted the anti-discrimination bill on social media, calling for a ‘full assault’.

They spread the contact information of all representatives, aides, and offices involved in the creation of the bill, and plan to carry out offensives until they are overwhelmed.

Their strongest weapon is a campaign for electoral defeat.

Many politicians have been choosing to submit to far-right Christian groups rather than face them due to their considerable voting power.

In 2018, South Chungcheong Province repealed a provincial ordinance for human rights after local Christian groups threatened to start a campaign to defeat the governor in the next election and mobilize local residents.

Such actions by far-right Christian groups undermine the National Assembly’s legislative function and threaten the root of democracy, in which the vicious cycle of repeating legislative attempts for anti-discrimination and failure ends up empowering the radical sentiments of the Protestant church.

The National Human Rights Commission of Korea conducted a survey in April, in which 88.5 percent of respondents supported the enactment of a new anti-discrimination law.

Experts argue that it goes against democratic principles to violate the rights of a minority, even if there is sizable opposition against laws designed to protect them.

Politicians should guide the public opinion towards human rights, they said.