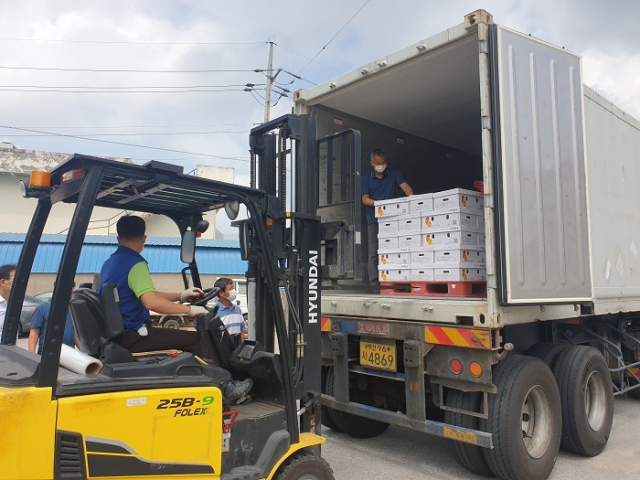 Boxes containing paprika are loaded onto a truck for exports to China, at an agricultural cooperative in Namwon, South Jeolla Province, on Aug. 25, 2020, in this photo provided by the agriculture ministry. The exports are the first of their kind.

SEOUL, April 4 (Korea Bizwire) — South Korea’s exports of agriculture products reached an all-time high in the first quarter of the year on the back of strong demand for kimchi and processed foods, data showed Sunday.

The record amount of US$1.98 billion represents a 13.7 percent rise from the previous year, according to data compiled by the Ministry of Agriculture, Food and Rural Affairs.

By category, outbound shipments of fresh products remained sluggish, but those of processed goods increased 9.3 percent to hit $359 million.

The ministry said exports of kimchi, a traditional Korean side dish usually made of fermented cabbage, salt and hot peppers, soared 54.4 percent to reach $47 million.

Outbound shipments of ginseng-related products, widely consumed as health supplements in South Korea, also grew to reach $230 million last year amid the growing popularity of health products during the pandemic.

Exports of processed rice goods, such as home meals like porridge, grew 14.7 percent to $1.62 billion, while those of instant noodles gained 18.9 percent to $157 million.

By region, exports to the United States jumped 21.3 percent from the previous year to $317 million on the back of demand for ramen, kimchi and processed rice products.

Outbound shipments to Southeast Asia and India rose 24 percent to $457 million thanks to increased home meal demand due to the pandemic.