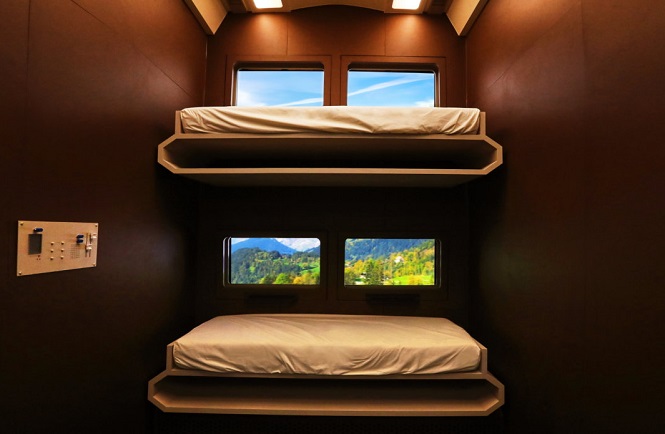 This photo provided by Ader Error shows the changing room in its flagship store in southern Seoul.

SEOUL, Nov. 7 (Korea Bizwire) — Changing rooms, which once featured white walls and hooks to hang clothes, are turning into new places where young people in their 20s and 30s can take eye-catching photos and videos.

One of its changing rooms is equipped with a karaoke machine. Since the room is insulated for sound, it’s not rare to see some customers sing while trying on new clothes.

Another changing room that looks like an inside of a train is equipped with a bunk bed, making customers feel like they are trying new clothes in a space existing only for themselves.

The newly-opened Nike Style shop in Hongdae, a popular entertainment district in western Seoul, has a changing room that is decorated like a photo studio. Customers can adjust the lighting to take unique photos and videos.

Musinsa Standard Gangnam, an offline store of online fashion mall Musinsa, is has a total of 15 changing rooms that feature LG StanbyME wireless monitors, enabling users to enjoy mirroring their own styles through a connection with smartphones.

The primary reason why fashion companies are making more efforts to create unique changing rooms is that they are effective as spaces for brand experience.

In particular, among the young generation in their 20s and 30s who are active on social media, photos taken while trying on new clothes in changing rooms are freely shared, creating a huge effect in viral marketing.