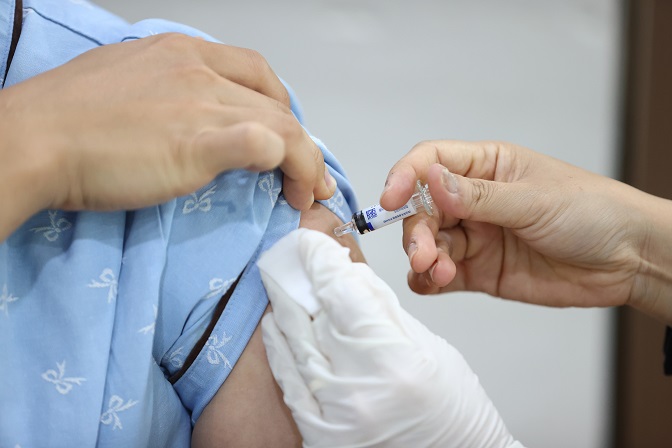 SEOUL, Oct. 21 (Korea Bizwire) — The head of South Korea’s public health body said Wednesday there was no direct link between flu shots and recent reported deaths and the government will go ahead with the nationwide flu vaccine program.

Jeong Eun-kyeong, head of the Korea Disease Control and Prevention Agency (KDCA), told a media briefing that the KDCA will conduct thorough investigations into the recent deaths of nine people who got flu shots.

“We have not found a direct connection between deaths and vaccines, or a relation between adverse effects of flu shots and deaths,” said KDCA chief Jeong Eun-kyeong.

“Considering no major severe adverse effects have been reported from one specific vaccine, we decided not to stop flu vaccinations.”

The KDCA said two deaths may be related with anaphylaxis shock, a serious allergic reaction after immunization.

Of the nine deaths, health authorities are currently conducting epidemiological investigations, including autopsies, on eight cases.

So far, 8.36 million people have received flu shots under the state-run program.

Earlier, health authorities reported that a 68-year-old man on the country’s southern resort island of Jeju and a 78-year-old man in Daegu have died after getting the shots.

Health officials said they are investigating whether there is any causal link between their deaths and flu vaccines, noting that both men had underlying diseases.

Gyeonggi Province also reported two deaths from people who received the shots at public centers in Gwangmyeong and Goyang.

Fears over flu vaccines emerged last Friday after a 17-year-old boy in the western port city of Incheon died two days after receiving a flu shot.

Similar fatalities were reported from a 77-year-old woman in Gochang, North Jeolla Province, and from an 82-year-old man in Daejeon on Tuesday. Both received flu shots Monday.

“We feel regret over people’s concerns over free flu shots and are looking into the situation in a grave manner,” said Vice Health Minister Kim Ganglip at a press briefing. “But first, we must find out the exact cause of the recent deaths.”

Health authorities said they are closely monitoring people who were administered those vaccines at the same medical institutions with the deceased on the same day.

So far, 431 people showed abnormal responses after receiving flu shots, though no causal connection to flu shots has been confirmed. Of them, 111 showed local reactions, 119 had allergies and 93 suffered fever. 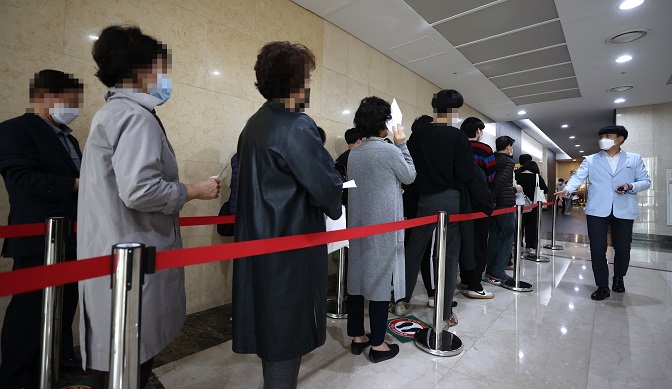 Citizens wait in line to receive a free flu shot at a medical center in Seoul on Oct. 19, 2020. (Yonhap)

Experts said it is too early to determine whether flu vaccinations should be stopped.

“No drugs or vaccines are 100 percent safe, but we should know that flu vaccines have been around for more than 70 years, since 1945,” said Ki Mo-ran, an epidemiology professor at the National Cancer Center.

“We would have not used flu vaccines if there were so many deaths connected with flu shots.”

According to the KDCA, there has been only one death case that authorities found a connection to a flu shot. In 2009, a 65-year-old woman was diagnosed with Miller Fisher syndrome, a rare nerve disease, after receiving a flu shot and died a year later.

Prior to the suspected flu shot deaths, many people already expressed concerns over flu vaccinations after some of the inactivated flu vaccines, handled by Shinsung Pharm, were found to have been exposed to room temperatures during shipping last month. It recalled the mishandled products later.

Earlier this month, Seoul’s drug safety watchdog ordered Korea Vaccine to recall 615,000 doses of flu vaccines after confirming white particles were found in the vaccines, though it believed that the efficacy and safety of vaccines were not compromised.

“Any vaccine that is suspicious should be recalled to prevent bigger troubles,” said Kim Woo-joo, a professor of infectious medicine at Korea University Guro Hospital in Seoul.

“At a time like this, the government should stick to its principles, but the problem is that people are worried.”