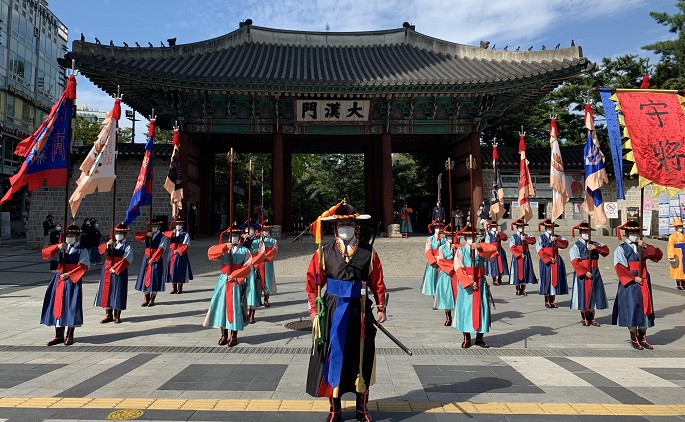 This photo, provided by the Seoul city government on Oct. 20, 2020, shows a ceremony for the changing of royal gatekeepers at Deoksu Palace in Seoul.

SEOUL, Oct. 20 (Korea Bizwire) – The spectacular royal guard mounting ceremony at Deoksu Palace, one of the major traditional tourist attractions in Seoul, resumed Tuesday after nearly nine months of suspension due to the new coronavirus pandemic, the city government of Seoul said.

The changing of the guard ceremony is an elaborate tourist event featuring a royal patrol unit, clad in traditional guard uniforms, switching position with a royal gate-keeping unit.

Since its inception in 1996, the event, offering a glimpse into the royal history and grandeur of the Joseon Dynasty (1392-1910), has been widely loved by citizens and tourists.

But the city put the ceremony on hold Feb. 1 following the first local case of the coronavirus being reported in late January.

The latest resumption came after the country eased its social distancing guidelines to Level 1, the lowest on its three-tier scale, on Oct. 12 amid a slowdown in new COVID-19 cases.

With the resumption, the guard changing ceremony will be held three times a day — 11 a.m., 2 p.m. and 3:30 p.m. — every day except Mondays at Deoksu Palace in central Seoul.

An accompanying royal guard patrol march ceremony will also be resumed, taking place once a day following the 11 a.m. change-of-the-guard session, according to Seoul city officials.

Resuming the marching ceremony, the city also expanded the coverage of the patrol march, previously confined to the distance from the palace to nearby Gwanghwamun Square and Bosingak belfry, farther to nearby tourist areas, including Cheonggye Plaza, Namdaemun Market and Sungnye Gate, according to officials.

The march features a patrol unit of some 30 royal guard members, including royal flag bearers and a music band.

Along with the events, the Seoul city also plans to bring back a tourist experience event allowing participants to announce the opening of a guard-changing ceremony by striking a designated traditional drum in person.

The city said, however, other high-risk, in-person events will remain suspended due to virus concerns and the resumed events will also be operated “flexibly” to avoid causing crowds.