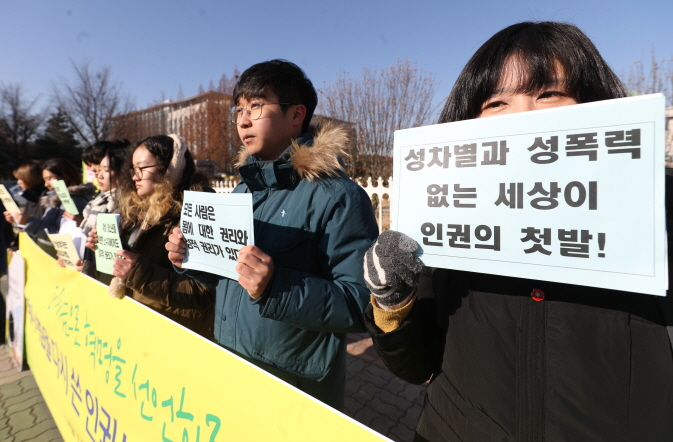 The term ‘Me Too’, denoting the worldwide campaign against sexual assault, entered the list in fifth place, reflecting the heated discourse in Korean society. (image: Yonhap)

The word ‘feminist’ topped the list, which seems to reflect the heated debate on gender issues in South Korean society.

The word gender in question refers to the social construct of the word gender relative to biological gender, which was the source of much discussion in South Korea last year.

According to Naver Dictionary, the word ‘feminist’ is defined as ‘a person who follows or claims feminism’ or ‘a figurative term to describe a man who is kind to women.’

Next in line was the Korean term for ‘love child’, a child born between a man and a woman who are not legally married. The third most searched word was ‘ask’.

Naver explained that many homophones of ‘ask’ were also found in search results. Other words, such as ‘self-improvement’, and ‘be the talk of the town’ were also on the list of the most searched words.

Meanwhile, the most searched word in 2017, ‘utter indifference,’ did not even make the list in 2018.

‘Celeb’, an abbreviated term for ‘celebrity,’ was the most searched neologism. The word refers to a well-known figure in the fields of entertainment or sports.

In addition, the term ‘Me Too’, denoting the worldwide campaign against sexual assault, entered the list in fifth place, reflecting the heated discourse in Korean society.