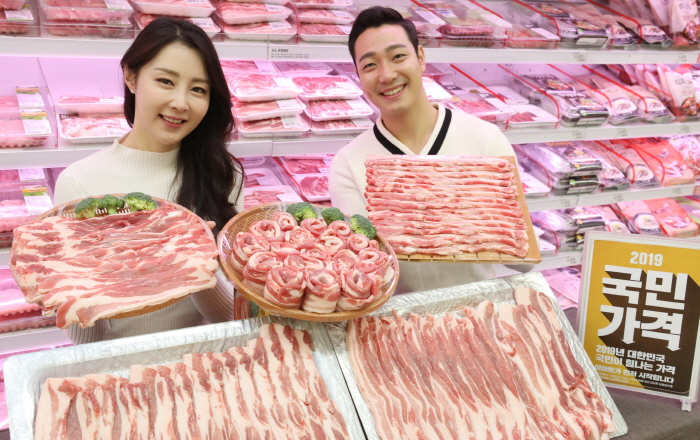 Emart declared a new price policy, “price for the public,” starting at the beginning of the new year, igniting a price war in the retail industry. (image: Shinsegae Group)

SEOUL, May 7 (Korea Bizwire) – The price war between online and offline retailers, which started at the beginning of this year, is intensifying.

As Emart Inc., retail giant Shinsegae’s supermarket chain operator, declared a “price for the public” strategy against Coupang, which has always been leading the price competition in the online retail industry with a low-cost system, Lotte Mart Co. and Wemakeprice Inc. also joined a series of price wars.

The industry expects that there is a high possibility of a continuing price war for the time being, which is aimed at taking the lead in the future retail market.

According to retail industry insiders on Sunday, Wemakeprice, an e-commerce company that entered the price war recently, declared a policy of lowest prices for daily necessities, which is a move to target its industry rival Coupang.

The company announced on its website that it would compensate customers who purchased daily necessities that were more expensive than Coupang by paying twice the difference.

On the other hand, Emart declared a new price policy, “price for the public,” starting at the beginning of the new year, igniting a price war in the retail industry.

The main goal of the project was to select an agricultural, marine and livestock product during the first and third week of each month and sell it at discounted price for a week.

The products Emart has sold at discounted prices include abalone, raw chicken and rice.

Emart’s new policy, which has long dominated the market as the South Korea’s largest hypermarket chain, represents the agony of the offline retail industry.

The offline retail industry has seen its profits plummet recently under direct threat of e-commerce companies such as Coupang.

As the position of large retailers has become increasingly narrow due to shopping trends, changes in population structure and aggressive pricing policies by online retailers, the company has expressed its determination not to lose market leadership even at the risk of cutthroat competition.

Industry experts predict that despite considerable controversy, there is a high chance that price wars between online and offline companies will continue for the time being in the battle to gain the upper hand in the future of the retail market.

Tension within the retail industry is mounting as eBay Korea, the number one e-commerce company that has refrained from price wars for some time, but is expected to enter a full-fledged price war from the end of this month.

The industry sees the situation as a game of chicken expanding to offline markets this year. Competition for market leadership will intensify as both online and offline businesses are desperate gain the upper hand.