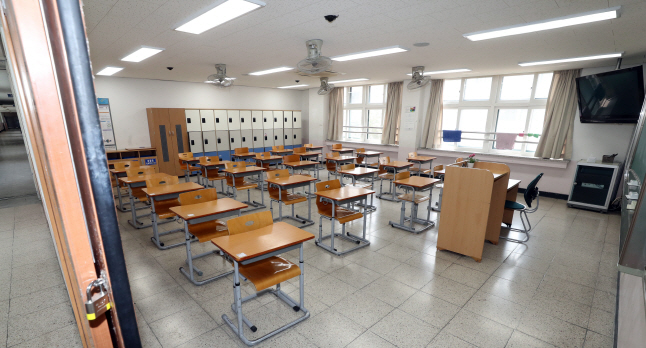 This photo shows a high school classroom in the eastern Seoul ward of Seongdong on May 11, 2020. (Yonhap)

DAMYANG, July 7 (Korea Bizwire) — A local high school teacher was forced to cancel a class on sex education after receiving complaints from parents that students were asked to bring condoms to class.

The high school teacher in Damyang County, South Jeolla Province asked each student to bring five bananas for a class titled ‘pregnancy and childbirth,’ a part of a family and technology course.

The teacher also told students that they would learn how to put on condoms using the ones available at the school clinic for next class.

The school is attended by both male and female students. The teacher divided 22 students into five groups to carry out demonstrations for putting on condoms.

Parents were soon informed of the news, and sent complaints to the school dean and the teacher, who cancelled all of the classes.

“We received complaints from parents that a detailed course on sex education using condoms and bananas would end up encouraging more sexual assault,” said the school dean.

“The teacher in charge believed that a detailed course on sexual education would be effective, but accepted the views of the parents to cancel the course.”