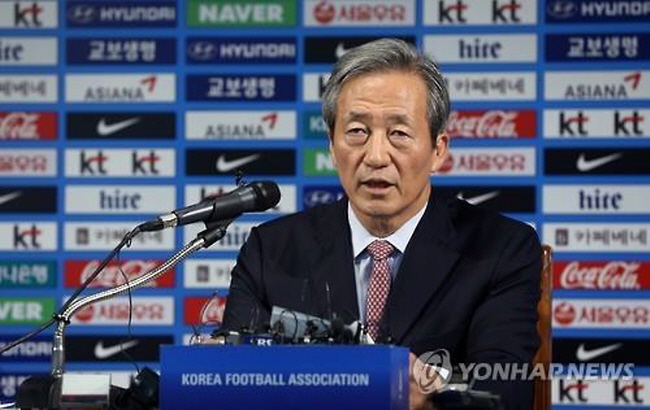 “I have become a target of the attack because I am taking aim at the heart of FIFA,” Chung said at a press conference in Seoul. “FIFA’s Ethics Committee only goes after people who challenge its president, Sepp Blatter. People say the committee is a contract killer for Blatter.”

Chung made the comments in response to reports that the Ethics Committee is investigating Chung’s charity donations to Pakistan and Haiti.

The FIFA Ethics Committee is reportedly questioning whether Chung’s donations to flood-ravaged Pakistan and quake-stricken Haiti in 2010 were used for their intended purposes, since Chung was pursuing to be re-elected as FIFA’s vice president around the same time. It is also apparently looking into Chung’s pledge in 2010 to create a fund to support football projects, valued at US$777 million, as South Korea was bidding to host the World Cup. He was still serving on FIFA’s Executive Committee.

Reports say FIFA is seeking a 15-year suspension for Chung for offering to start the fund and another four years for his criticism of the Ethics Committee.

Chung reiterated his earlier response that he has consistently provided charitable donations to those in need since the 1990s.

“They’re not only damaging my candidacy, but they’re also destroying the presidential election and FIFA itself,” Chung added. “That I’ve become a target of their attack, however, is actually the strongest endorsement for my candidacy, and it proves that I am best suited to lead the reforms for FIFA.”

Chung, a former FIFA vice president hoping to succeed Blatter, will be up against UEFA President Michel Platini and Jordanian Prince Ali bin Al-Hussein in the Feb. 26 election. The South Korean candidate has taken jabs at FIFA’s inability to reform itself, arguing that he is the right person to restore transparency at the organization marred by damaging corruption scandals.

“Unlike Blatter or Jerome Valcke (secretary general of FIFA) and Platini, I am not being accused of bribery, fraud, corruption or conflict of interest,” Chung said. “And for a FIFA Executive Committee member to help his country’s bid to host a World Cup is not only a long tradition of FIFA but also a natural and patriotic act.”

Chung charged that the ongoing election campaign is in danger of degenerating into a farce.

“Whether I can remain a qualified candidate is up to the healthy conscience of the international community,” Chung said. “But I have no expectation whatsoever about the Ethics Committee hearing, because I know everything is just fraud. FIFA is ailing even more badly than it seems on the surface.”

Chung earlier mounted an attack on Platini, considered his main rival. Last month, he accused the Asian Football Confederation (AFC) of violating election rules by sending unsolicited letters to its member associations seeking support for Platini, and claimed the former French international must have been behind the move.

He called on FIFA to investigate the matter, but FIFA’s Ad-hoc Electoral Committee told Chung that it found no evidence that improper influence or pressure had been applied by the AFC.

Chung was a FIFA vice president from 1994 to 2011. He also has been the head of the Korea Football Association (KFA), and was instrumental in bringing the FIFA World Cup to South Korea for the first time in 2002, as a co-host with Japan.