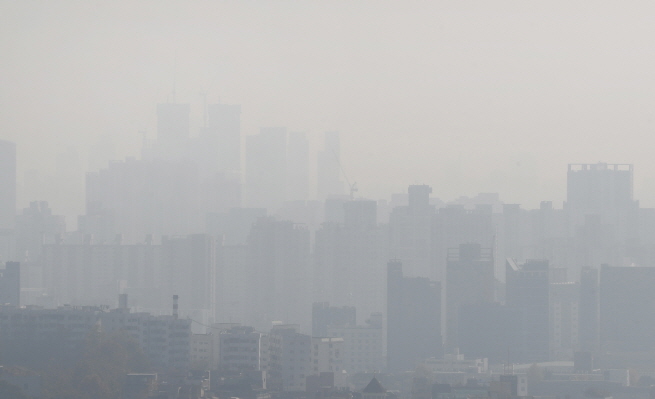 Buildings are blanketed in a gray haze, caused by fine dust, in central Seoul in this photo taken on Dec. 25, 2019. (Yonhap)

SEOUL, Dec. 30 (Korea Bizwire) — South Korea’s fine dust emissions from coal-based power plants moved down 36 percent in the first three weeks of December from a year earlier, data showed Monday, after the country scaled down the operations of such plants for winter.

Emissions of fine dust from local coal plants reached 828 tons during the cited period, compared to 1,284 tons posted a year earlier, according to the data compiled by the Ministry of Trade, Industry and Energy.

The measure came as an effort to deal with a spike in fine dust here during the winter season.

Fine dust particles pose serious health risks as they more easily penetrate deeper into the lungs, while ultrafine particles can be absorbed directly into the blood stream.

South Korea said the limited operation of coal plants did not lead to power shortages, adding it will continue to keep a watchful eye on the supply from other sources including nuclear plants.

Earlier, South Korea unveiled a set of measures to limit fine dust pollution, which includes banning nonessential public vehicles from roads every other day in major cities for four months beginning in December.

The country plans to release a set of new measures to cope with fine dust emissions in February.