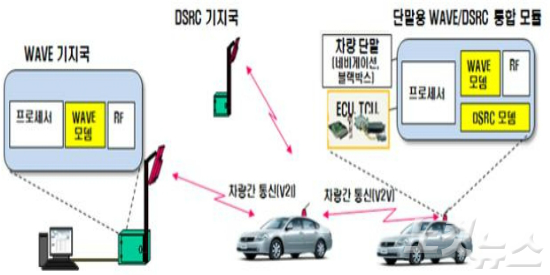 When a vehicle in front suddenly makes a brake, cars within the radius of 1.5 kilometers are supposed to receive a warning sign at a speed of 6 Mbps. (image: Electronics and Telecommunications Research Institute)

SEOUL, Aug. 28 (Korea Bizwire) – A technology to prevent chain reaction crashes has been developed. The technology gives a vehicle behind a warning alert when a car ahead stops suddenly.

The Electronics and Telecommunications Research Institute announced on August 26 that the state-run institute and Ranix, a semiconductor chip developer, have successfully developed a core chip to avoid car pile-ups. When a vehicle in front suddenly makes a brake, cars within the radius of 1.5 kilometers are supposed to receive a warning sign at a speed of 6 Mbps. It also enables vehicles at a speed of 200 kilometers per hour to communicate with each other.

The chip is expected to be commercialized through a pilot project of the Cooperative Intelligent Transport System. The commercialized chip is planned to have an automatic halt function in a situation where it is hard for a vehicle behind to stop suddenly.

The 18-millimeter square-shaped chip can be installed anywhere including a rear view mirror and a dashboard. Moreover, an antenna for communication with another vehicle or a station will be integrated into the existing antenna such as a shark-fin antenna for the navigation system.

Aside from the crash prevention functionality, the chip will let drivers promptly receive traffic information, avoid collisions in the blind spot of an intersection and pay a toll.

The technology is the fruit of a four-year joint study conducted by the institute and the semiconductor company. The technology is in the process of commercialization by being transferred to manufacturers.

“The newly-developed technology is good at both high-speed authentication and code processing as well as communication,” Oh Hyun-seo, a senior researcher in the institute said.