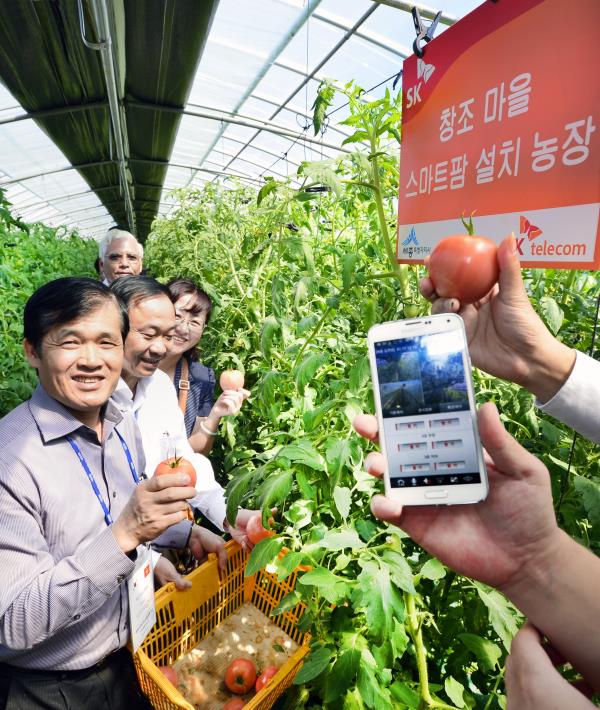 According to the Sejong Creative Economy Center, South Asian delegates visited the state-of-the-art “smart farms” which combine agriculture and ICT, and considered the possibility of incorporating the new technology into their own agricultural practices. An official said, “Our center is playing a critical role in spreading ‘K-agriculture’ to Southeast Asia.”

According to a statement from the center on September 9, a total of 22 high-ranking officials from Vietnam visited a smart farm growing tomatoes in Yeondong-myeon, Sejong City the day before. They have been in Korea since August to receive leadership training at the invitation of the Central Officials Training Institute of Korea.

The group, including some 10 vice minister-level officials, such as vice chairman of the Board of Audit and Inspection of Vietnam, and the chief of the Ministry of Public Security and other elites, showed high interest in the smart farm by asking what benefits farmers could reap from the new technology.

The smart farm technology allows farmers to remotely control devices within a grow room environment through a smartphone application. The application provides farmers with an easy way to automate irrigation operations and environmental conditions such as temperature and humidity in a greenhouse, and control these variables remotely.

SK Group has also built 50 security monitoring systems in areas around the smart greenhouses, since the new remote control systems allow farmers to manage their operations away from their farms. With the new technology, farmers equipped with the application are not forced to spend all their time inside the greenhouses.

Major General Vu Hai San, the leader of the visiting group, said, “I am surprised that farmers can monitor and control the temperature of greenhouses via smart devices.”

In a separate move, another nine Vietnamese officials visited the center on September 9, and looked around the smart farms. As they are the policy makers for Vietnamese agriculture, they are expected to act as a bridge bringing the smart farm model to Vietnam.

On September 10, approximately 20 government officials and businessmen from Thailand visited the center, including the director of the Thailand Board of Investment. They are currently visiting Korea on an invitation from the Korea-ASEAN Center.

Since its establishment in June, a total of 1,300 individuals have visited the center, including farmers and foreign agriculture company employees, and an increasing number of foreign institutions are coming to the center as it has emerged as a hub for the latest ICT agriculture.