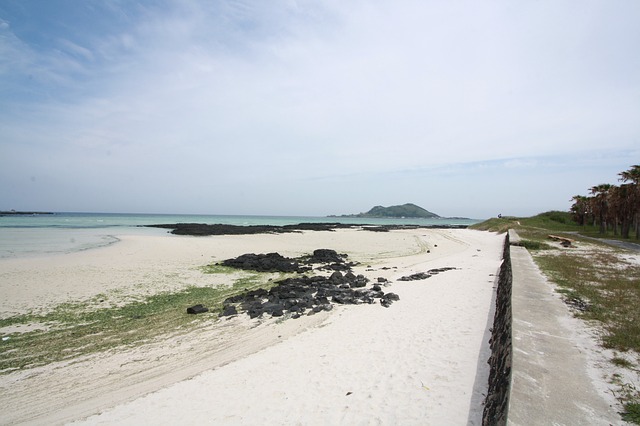 The beautiful beaches of Jeju Island, some of the most sought after vacation destinations in Korea, are slowly disappearing. (image: Pixabay)

SEOUL, June 13 (Korea Bizwire) – The beautiful beaches of Jeju Island, some of the most sought after vacation destinations in Korea, are slowly disappearing.

Reckless coastal development and a rise in sea levels due to climate change are producing widespread coastal erosion.

On May 19, an endless line of dump trucks brought sand to Jeju City’s Iho Tewoo Beach, which recently opened at night. More than 1,000 cubic metersof sand from other regions have been transported to patch up beaches that have been decimated by wind and waves. Twenty-seven 25-ton dump trucks transported sand from the Exclusive Economic Zone (EEZ) of the West Sea on that day alone.

This has been happening every year for nearly ten years. Over the past four years, 6,400 cubic meters of sand have been relocated from the West Sea to Iho Tewoo Beach.

The beach was once known as “black sand village” due to its abundance of basalt sand. With the beach now relying on sand from other regions to replace that lost to erosion, it has started to lose its unique ‘black sand’ character.

Beaches in Jeju Island have formed over a long period of time as a result of volcanic activity, and have a distinctive sand composition that differs from other regions. However, they are losing their unique characteristics due to the added sand that is dumped on the beaches as part of “preserving the coast” efforts.

In order to minimize the mixture of different sand, the beaches are restructured by flattening out the sand pushed toward one side due to winds or tidal currents, or by sorting out gravel.

“Beaches in Jeju need to be handled carefully with approaches suitable for the unique environment, but most of them are quickly fixed for the summer season without much consideration,” said Lee Young-woong of the Korea Federation for Environmental Movements. “Studies and research must be conducted, because transporting sand from other regions could have an influence on Jeju’s coastal ecosystems,” he added.

Furthermore, the Ministry of Oceans and Fisheries monitored coastal erosion at 11 beaches on Jeju Island last year, of which seven received a grade ‘C’ meaning ‘needs concern’. Only one beach received an improved grade from the previous year (2014), and the grades of five beaches dropped from B to C, showing that coastal erosion is becoming more problematic.

Experts say that the causes of the increase in coastal erosion include environmental effects such as a rise in the sea level, storms, the more frequent occurrence of high waves, and also the construction of artificial structures such as coastal roads and breakwaters.

Coastal erosion not only causes the loss of sand, but also destroys marine habitat and may impact certain human activities, leading to both economic and social damages. 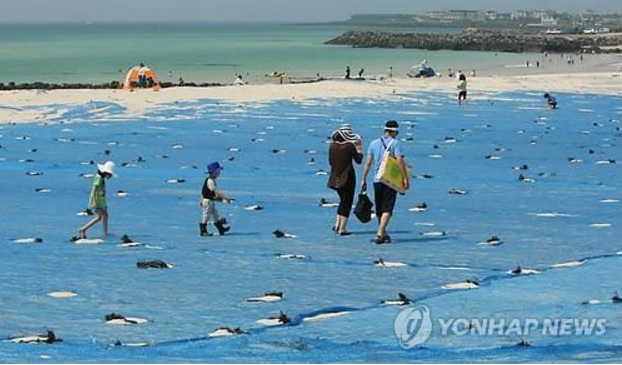 The sand at Gwakji Beach is covered for protection against wind. (image: Yonhap)

“Avoiding reckless development along the coast is most important for preventing coastal erosion. Another method is beach nourishment, where sands are artificially transported to a beach where erosion has already started,” said Kim Namhyung, a civil engineering professor at Jeju University.

“A grain size of 0.2 mm is most comfortable for people to walk on, however that’s only taking humans into the consideration, not the coastal environment,” he added. Professor Kim also warned that “beach nourishment projects must take place after a thorough study of each coastal area to provide appropriate sand, otherwise the sand will simply be washed away again, and it may disturb the ecosystem.”