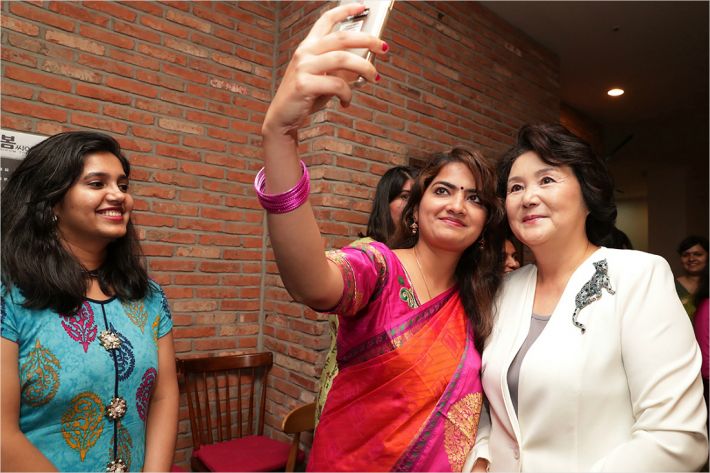 The movie screening was an effort aimed to strengthen relations between the two countries, especially as President Moon and his wife prepare to visit India for a state visit next week.

Various diplomats from the Indian Embassy in Seoul including the Indian ambassador’s wife were present.

President Moon’s state visit will take place between July 8 and 11 at the invitation of Indian Prime Minister Narendra Modi.

Welcomed by Indian students upon her arrival at the theater, the First Lady responded by saying “namaste,” an Indian greeting, before watching the movie that lasted over 2 hours and 30 minutes.

The film, based on a true story, depicts the struggles of former wrestler Mahavir Singh Phogat and his two wrestler daughters as they try their best to participate in the Commonwealth Games in the face of societal oppression.

The film broke records in India, becoming the top box office draw in the nation’s history in 2016 before being released in Korea last April.

The First Lady said that the movie, which illustrated the fatherly love that the main character has for his daughters, brought her to tears.

“I feel like parental love is the same in India and Korea which makes me feel closer to the Indian nation,” said Kim.

The First Lady also mentioned her upcoming trip to India and said that she hoped the two countries will exchange talks on economic cooperation, human rights, and environmental issues.