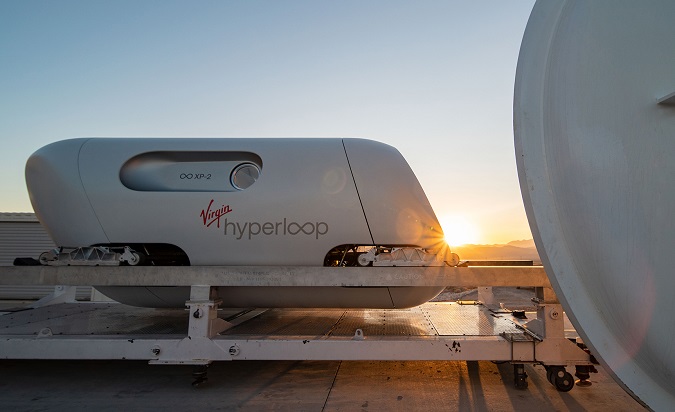 NEW DELHI, India, Nov. 8 (Korea Bizwire) – Virgin Hyperloop made history today as the first people successfully traveled in a hyperloop pod at the DevLoop test facility in the United States.

“For the past few years, the Virgin Hyperloop team has been working on turning its ground breaking technology into reality,” said Sir Richard Branson, Founder of the Virgin Group. “With today’s successful test, we have shown that this spirit of innovation will in fact change the way people everywhere live, work, and travel in the years to come.”

Josh Giegel, Co-Founder and Chief Technology Officer, and Sara Luchian, Director of Passenger Experience, were the first people in the world to ride on this new form of transportation. The testing campaign will continue with Tanay Manjrekar, Virgin Hyperloop’s Power Electronics Specialist and native of Pune, riding next.

“Working on hyperloop – let alone being one of the first to ride it – is truly a dream come true,” said Tanay Manjrekar, Power Electronics Specialist at Virgin Hyperloop. “It is my hope that India sees the tremendous opportunity ahead of them – to embrace the challenge and leapfrog the rest of the world yet again – and continues to progress the Pune-Mumbai hyperloop project.”

The human testing, from the beginning stages all the way through to today’s successful demonstration, was overseen by the industry-recognized Independent Safety Assessor (ISA) Certifer. Having undergone a rigorous and exhaustive safety process, the newly-unveiled XP-2 vehicle demonstrates many of the safety-critical systems that will be found on a commercial hyperloop system and is equipped with a state-of-the-art control system that can detect abnormal conditions and rapidly trigger appropriate emergency responses.

“I can’t tell you how often I get asked ‘is hyperloop safe?,’” said Jay Walder, CEO of Virgin Hyperloop. “With today’s passenger testing, we have successfully answered this question, demonstrating that not only can Virgin Hyperloop safely put a person in a pod in a vacuum environment, but that the company has a thoughtful approach to safety which has been validated by an independent third party.”

The occupants made their maiden voyage on the newly-unveiled XP-2 vehicle, designed by BIG – Bjarke Ingels Group and Kilo Design, which was custom-built with occupant safety and comfort in mind. While the production vehicle will be larger and seat up to 28 passengers, this 2-seater XP-2 vehicle was built to demonstrate that passengers can in fact safely travel in a hyperloop vehicle.

This announcement builds on significant progress around the world on the regulatory front. In India, the Government of Maharashtra has deemed hyperloop a public infrastructure project and approved the Virgin Hyperloop-DP World Consortium as the Original Project Proponent (OPP) for the Mumbai-Pune hyperloop project. This is a landmark announcement for building the Pune-Mumbai hyperloop transportation system, recognizing hyperloop technology alongside other more traditional forms of mass transit. Further to the regulatory guidance document issued by the United States Department of Transportation’s Non-Traditional and Emerging Transportation Technology (NETT) Council, Virgin Hyperloop is looking to work with central authorities in India to explore a regulatory path for hyperloop in the country.

“Today’s test is a significant step forward towards a commercial hyperloop in India – perhaps the world’s first – connecting Pune with Mumbai along the existing Expressway,” said Harj Dhaliwal, Managing Director of Middle East and India for Virgin Hyperloop. “The opportunity for India to lead the world in this new form of transportation is unprecedented. The project would be the largest private infrastructure investment in Maharashtra, creating 1.8 million direct and indirect jobs and $36 billion USD in socio-economic benefits.”

This momentum, combined with the advancements at the Hyperloop Certification Center and the historic safety demonstration achieved today, will pave the way for the certification of hyperloop systems around the world –– a key step towards commercial projects, including those in India, while having the first human testing of the technology take place in the United States.

“I believe in competing against market transitions, not competitors, and Virgin Hyperloop is well-positioned to lead in the future of transportation,” said John Chambers, former Executive Chairman and CEO of Cisco Systems, current founder and CEO of JC2 Ventures. “With the recent development of the Hyperloop Certification Center in my home state of West Virginia, in addition to Virgin Hyperloop’s various global projects, I think we are on our way to a cross-country partnership to bring this disruptive technology to India and beyond. I have always bet big on India and as the Executive Chairman of the US-India Strategic Partnership Forum, I am especially excited for what this announcement means for every citizen in the country. I look forward to supporting Virgin Hyperloop in this journey as they help the world dream what is possible for the next generation of innovation, entrepreneurism, and inclusion.”

Beyond Maharashtra, there is enormous potential to connect the entire subcontinent. Last month, Virgin Hyperloop announced a ground-breaking partnership with Bangalore International Airport Limited (BIAL) to conduct a feasibility study for a proposed hyperloop corridor from BLR Airport. The study, which focuses on technical, economic and route feasibility, is expected to be completed in two phases of 6 months each. With speeds of up to 1,080 kmph, hyperloop could transport thousands of passengers per hour from BLR Airport to the city center in under 10 minutes, according to the preliminary analysis.

Virgin Hyperloop also signed a MoU with the State of Punjab’s Transport Department in December 2019 and hopes to expand on its relationship with Punjab as the company continues exploring opportunities in northern India, independent of their work in the western and southern regions of the country.

Virgin Hyperloop is the only company in the world that has successfully tested hyperloop technology at scale, launching the first new mode of mass transportation in over 100 years. The company successfully operated a full-scale hyperloop vehicle using electric propulsion and electromagnetic levitation under near-vacuum conditions, realizing a fundamentally new form of transportation that is faster, safer, cheaper, and more sustainable than existing modes. The company is now working with governments, partners, and investors around the world to make hyperloop a reality in years, not decades. Learn more about Virgin Hyperloop’s technology, vision, and ongoing projects here.