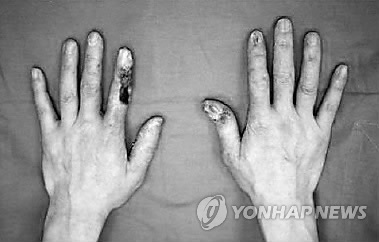 The affected orthopedist had performed more than 100 spinal injections per month for 17 years prior to the diagnosis. (image: Yonhap)

SEOUL, Jan. 18 (Korea Bizwire) — An orthopedist has developed necrosis on a finger after working for 17 years around radiological equipment, according to a paper published in a recent journal of the Korean Orthopaedic Association by Professor Kim Yu-mi’s research team at Wonkwang University‘s medical school. This case of necrosis is the first case reported of its kind.

According to the paper, the affected orthopedist had performed more than 100 spinal injections per month for 17 years prior to the diagnosis. The orthopedist was diagnosed with radiodermatitis, and underwent a procedure to remove the affected skin and replace it with a tissue transplant.

The International Commission on Radiological Protection (ICRP) recommends that the occupational radiological exposure of any worker in orthopedic clinics should be limited to an effective dose of 20 mSv to the whole body per year averaged over five consecutive years. An effective dose to the cornea of 150 mSv in a year or 500 mSv to the extremities (hands and feet) and skin should not be exceeded.

Professor Kim said that it has also been reported that an X-ray tube inside the machine affects the hands with a dose of 40 mSv per minute, thus the dose under such conditions for 12 minutes and 30 seconds is enough to exceed the standard yearly figure suggested by ICRP. Kim suggested that doctors should wear radiation-shielding gloves all the time as a precaution.