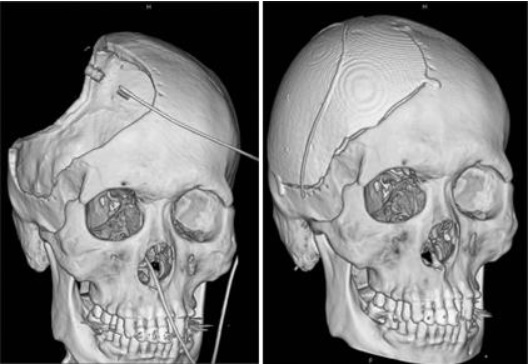 It took two weeks for the team to produce a 3D printed titanium skull, and undertake a one-hour transplant operation.(image:Hallyim University Medical Center)

SEOUL, Jan. 27 (Korea Bizwire) — A head injury patient became the first in Gangwon Province to have had a 3D printed skull transplant, according to an announcement from a neurosurgery team led by Prof. Yang Jin-Seo at Hallyim University Medical Center on January 26.

The patient in his thirties, Mr. Kim, was found on the street in November 2014 with a broken skull and ruptured blood vessels in his brain’s dural area. Mr. Kim underwent a surgical procedure, led by Prof. Yang, to decrease high brain pressure through a skull resection and the removal of blood clots.

However, the surgical team had difficulty covering the 200 square centimeter resected area on Mr. Kim’s skull due to the severity of the injury. Prof. Yang decided to use a 3D printed skull transplant on Mr. Kim, as autogenous bone grafts or bone cement transplants usually take four hours and were deemed to be too risky given Kim’s condition at the time.

It took two weeks for the team to produce a 3D printed titanium skull, and undertake a one-hour transplant operation. The transplant turned out to be a success, and Mr. Kim is currently well and conscious.

Although the cost of 3D printed artificial bones is high for now, they can decrease the risk of complications developed from long surgical procedures and infections, since transplants of 3D bones take much less time than conventional transplants. Prof. Yang said that he expects to see more successful operations using 3D printed bones on the basis of his case.