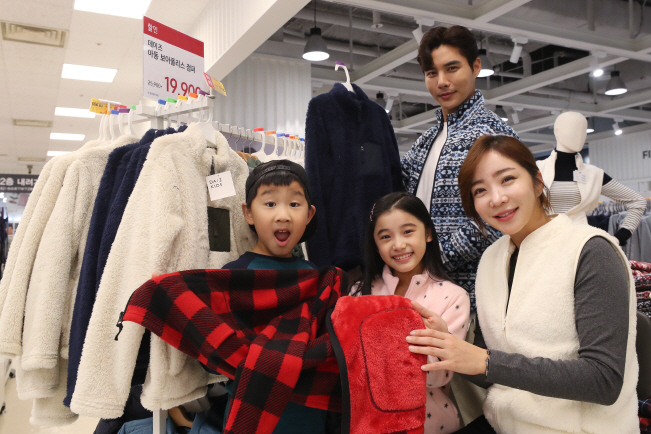 Fleece is a thermoelectric fabric that processed polyester surfaces with the same texture as wool. (Yonhap)

Clothing companies preparing winter goods have not hesitated to pick fleece as their main product for this year as consumers have tired of the bench coat craze.

Fleece is a thermoelectric fabric that processed polyester surfaces with the same texture as wool. It is lighter and smoother than other fabrics, and it is good for keeping one warm.

Thanks to the recent retro craze and trend that values practicality, demand for fleece products among young consumers is soaring.

This popularity is in part due to the fact that fleece jackets can be used as an outer in the fall and as an inner layer worn inside a coat or down jacket in the winter.

Unlike bench coats, clothing companies are also welcoming fleece as the sales period for fleece products is longer. This is because people can buy and wear fleece jackets from fall to winter.

Meanwhile, the forecast that this year’s winter will be warmer than last year is another factor that has added to the popularity of fleece jackets.

The North Face, an outdoor apparel company, launched new fleece jackets for adults and kids, and sales have already more than doubled compared to the same time last year.

The company’s new fleece jackets, which were introduced late last month, sold out just two hours after they were launched on the official The North Face website.

Furthermore, Millet has diversified its style by introducing 19 different fleece products this year.

FILA, on the other hand, has released six times as many fleece products as last year that use the warm and cozy material.

“Fleece jackets are not only warm and good for athletic pursuits, but also have no lint,” a fashion industry source said.

The source went on to say, “Uniqlo, which used to market its fleece jackets aggressively, has been hit by the boycott of Japanese goods, leading Korean companies to put out various related products to keep up with demand.”