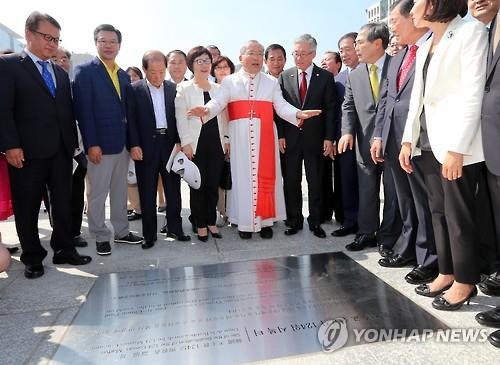 SEOUL, Aug. 24 (Korea Bizwire) — A stone was placed in a ceremonial plaza in downtown Seoul on Sunday to commemorate Pope Francis‘ visit to South Korea last year.  The floor tile was put at the northern tip of Gwanghwamun Plaza, where the pope led a mass to beatify Korean martyrs a year ago. The tile, which is 1.7 meters wide and 1 meter long, is inscribed with the words, “We lay this stone to mark Pope Francis’ beatification of Paul Yun Ji-chung and his 123 companions in proclamation of this to the entire world on Aug. 16, 2014, here.”

A ceremony was led by Cardinal Andrew Yeom Soo-jung to unveil the stone with the attendance of Minister of Culture, Sports and Tourism Kim Jong-deok, Seoul Mayor Park Won-soon, and other influential figures from politics and the government. Pope Francis visited South Korea from Aug. 14 through Aug. 18, 2014, for his first trip here, where he also attended a gathering of Asian Catholic youths. 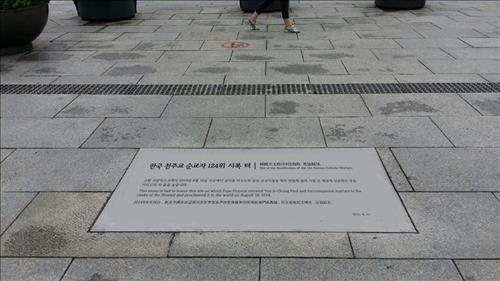 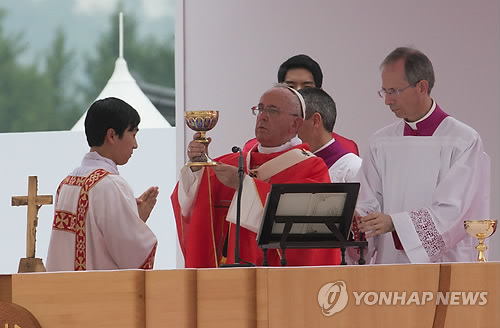