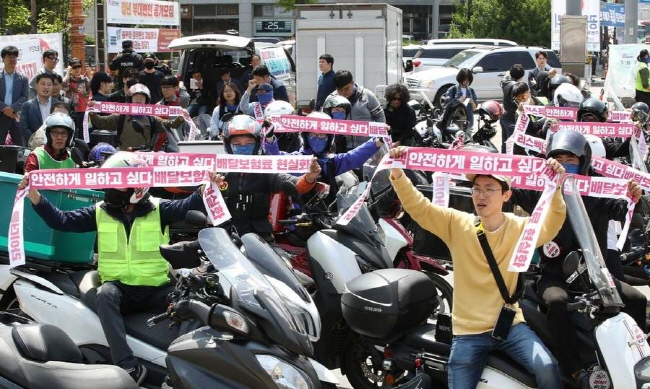 Delivery workers with app-based firms in South Korea launched their own labor union, named the Rider Union, on May 1, 2019. (Yonhap)

SEOUL, Nov. 27 (Korea Bizwire) — Food delivery people who rely on digital platforms such as apps have to pay about 10 percent of their earnings in commissions, according to a recent report.

According to the results, the fee for a food delivery person to make a delivery was an average of 3,500 won (US$2.97), while the brokerage fee taken by the delivery agency averaged 291 won.

In other words, each delivery person earns 2,714 won on average per delivery.

According to the survey, disposable income for delivery workers – which excludes spending on necessities including gas money, telecommunication charge, and food expenses – was 2.15 million won.

“Considering that insurance premiums are around 1.1 million won per year, the actual monthly income is around 2 million won, which is about 100,000 won less,” said the two researchers.

More than half of those surveyed said they work without signing working contracts, but 72 percent said they are instructed and supervised by agencies.

Furthermore, delivery workers were often treated unfairly in the process of receiving food from restaurants and delivering it to customers.

The percentage of people who were treated unfairly by restaurant owners, including abusive language, was 14.7 percent, compared to 34 percent from customers.