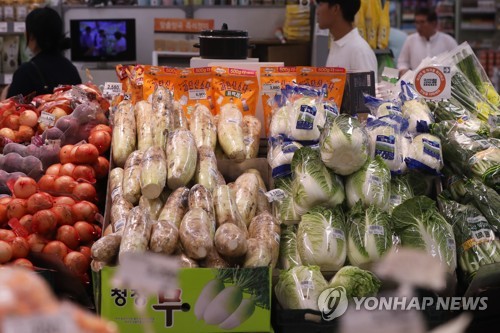 This photo taken Aug. 1, 2018, shows cabbages and radishes at a discount store in Seoul. (Image: Yonhap)

SEOUL, Aug. 1 (Korea Bizwire) — Prices of agricultural products in South Korea have spiked as the country grapples with a record-breaking heat wave, the government said Wednesday.

The wholesale price of agricultural products is 6.5 percent higher than average as of late last month, according to the Ministry of Agriculture, Food and Rural Affairs.

Vegetables grown outdoors, such as cabbage and radish, among others, led the increase, with the wholesale price of a head of cabbage jumping from 1,630 won (US$1.45) to 3,500 won from early July to the end of the month, the ministry said. The latest price is 50 percent higher than the usual rate.

The price of radish also rose from 1,128 won to 2,026 won during the cited period, with the latest figure 66 percent higher than usual, it said.

The government attributed the hike to the prolonged heat wave in the country. Hongcheon, 102 kilometers east of Seoul, logged the country’s highest-ever temperature on record of 40.3 C on Wednesday.

The average maximum temperature of major producers of cabbage and radish in Gangwon Province came to 32.5 C in mid to end-July, higher than the usual 28 C. The precipitation in the area also stood at 15 millimeters, 12 percent of the usual 117 mm, it added.

The prices are expected to remain high for the time being as the heat has shown no signs of diminishing, industry watchers said.