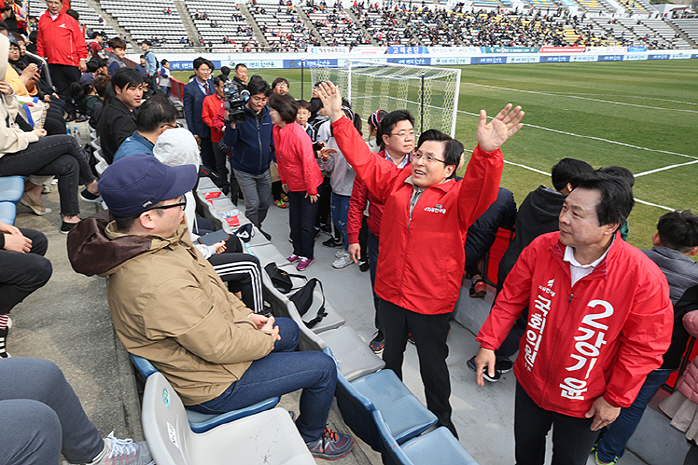 The K League discipline committee meted out a fine of 20 million won (US$17,590) against Gyeongnam for not handling the situation properly when main opposition Liberty Korea Party (LKP) members, including chairman Hwang Kyo-ahn and by-election candidate Kang Ki-youn, campaigned inside Changwon Football Center in Changwon, 400 kilometers south of Seoul, for the April 3 by-elections ahead of a K League 1 match against Daegu FC on Saturday.

“Political neutrality is important not only in football, but in all sports,” K League public affairs team director Kim Jin-hyung said at a press briefing at the Korea Football Association (KFA) House in Seoul. “The league decided to impose a 20 million-won fine on Gyeongnam.”

Under K League and KFA rules, election candidates and party officials can enter the stadium after purchasing a ticket at their own expense. But they cannot wear any clothing displaying a candidate’s number or name, their party name or emblem inside the stadium.

The rules also prohibit them from distributing pamphlets or cards containing political messages and from displaying slogans and banners.

The league’s code of conduct emphasizes that its members must maintain political neutrality, which is in line with FIFA and KFA ordinances that strictly ban any kind of political, religious and racial activities inside match venues.

The violation of such rules can result in a team being given a 10-point deduction, having to play a home match behind closed doors or receiving a fine of 20 million won or more.

It took nearly five hours for the discipline committee to make the decision on the case, the first of its kind since the pro football league started in 1983.

Even though the LKP is the main culprit, the K League said it was inevitable to punish Gyeongnam under its rules, which specify that a home team is held accountable if such an incident takes place at its stadium.

“Gyeongnam could have prevented the incident by hiring more security staff, since the by-election atmosphere in the region was heating up,” the league said. “They could have made a stadium announcement to publicly request the party officials leave the stadium, but such action was not taken.”

However, the K League said it also considered Gyeongnam’s efforts to stop the LKP’s campaigning at the scene.

“Through video clips and witnesses, we found that Gyeongnam tried to prevent the campaigning officials entering the stadium,” the league said. “We also acknowledge that it was difficult for the small number of club staff to block a big group of party members. Since it isn’t the case that the club directly violated its political neutrality obligation, we didn’t mete out any punishment like a points deduction or hosting matches in an empty stadium.”

Gyeongnam, last year’s K League 1 runners-up, showed their frustration after the incident took place Saturday, saying their security guards first warned and tried to stop LKP officials from campaigning, but Hwang and Kang’s people shoved their way into the stadium without taking off their party uniforms.

According to Gyeongnam, their staff explained the league rules to the LKP officials, but they ignored them and kept campaigning in the stands.

Gyeongnam later demanded the LKP compensate them for their expenses from the K League ruling. The K League 1 side warned that they will take legal action against the LKP if it doesn’t come up with “responsible measures” for their financial losses.

Gyeongnam have seven days to lodge an appeal against the K League discipline committee’s ruling.

Following the K League decision, the LKP apologized to Gyeongnam and football fans. The party also asked the league to reconsider its ruling on Gyeongnam, claiming that the club worked hard to take active measures.

Meanwhile, for its improper campaigning, the LKP has received an administrative disposition from the election commission of South Gyeongsang Province, which asked the party to cooperate in making the election clean and fair.