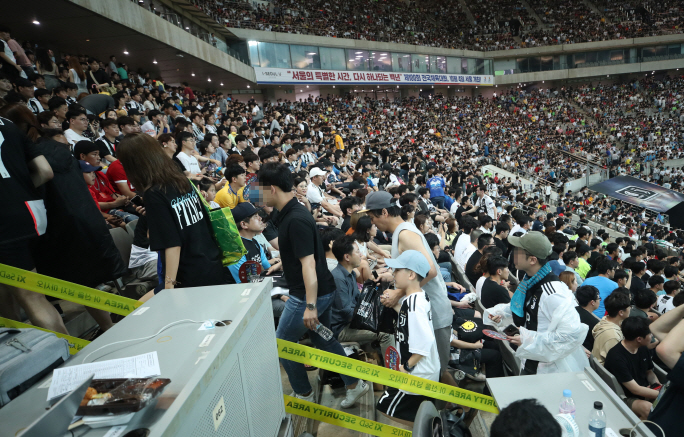 Fans leave an exhibition match between Juventus and the K League All-Stars at Seoul World Cup Stadium before the end of the contest on July 26, 2019, with Juventus star Cristiano Ronaldo on the bench. (Yonhap)

SEOUL, Jul. 30 (Korea Bizwire) — Outrage over Cristiano Ronaldo’s absence in a friendly match between Italian football champions Juventus and K League All-Stars continues as fans are preparing to sue the agency responsible for the fixture after the football superstar remained on the bench for the duration of the match.

More than 63,000 fans gathered last Friday at Seoul World Cup Stadium to watch the game after purchasing tickets that cost as much as 400,000 won (US$337).

The whole event got off to a bad start as Juventus arrived two hours later than planned due to bad weather conditions.

An autograph session, which had already been delayed, turned out to be an even bigger disappointment to the fans as Ronaldo, originally scheduled to participate in the event, refused to show up.

The team arrived at the stadium at 8:04 p.m., four minutes past the original kick-off time.

The game was delayed by almost an hour. It was an outright violation of a football regulation that requires each team to arrive at the stadium at least an hour and 30 minutes prior to kick-off.

What’s more, Ronaldo, unlike what had been agreed in the contract, was benched throughout the whole game. He even left the mixed zone after rejecting an interview, which further angered the fans.

Many were outraged when Ronaldo posted a picture of himself exercising on a treadmill on social media immediately after returning to Italy.

A group of spectators are preparing to sue TheFasta, the agency responsible for organizing the friendly match, and make demands for compensation.

The first group of plaintiffs is being formed, a process which will continue until August 7. More than 1,900 have already joined the group as of last Monday.

“It will be difficult to accuse Ronaldo of fraud just for failing to run in a game,” said one legal expert. “Non-performance of a monetary obligation also requires explicit proof that the responsibility lies on the agency.”

He added, however, that the agency’s actions may qualify as an act of deception as it claimed in its advertisement that Ronaldo would play in the game.

“This may constitute an act of exaggerated advertising,” he said. “If fans can’t get a full refund, there may still be a chance for a partial refund.”

Oh Seok-hyeon, a lawyer from LKB Partners LLC, sued TheFasta, Juventus, and Ronaldo at the Seoul Metropolitan Police Agency based on accusations of fraud on Monday.

Oh reportedly claimed in the complaint that they defrauded football fans of 6 billion won (US$5 million).