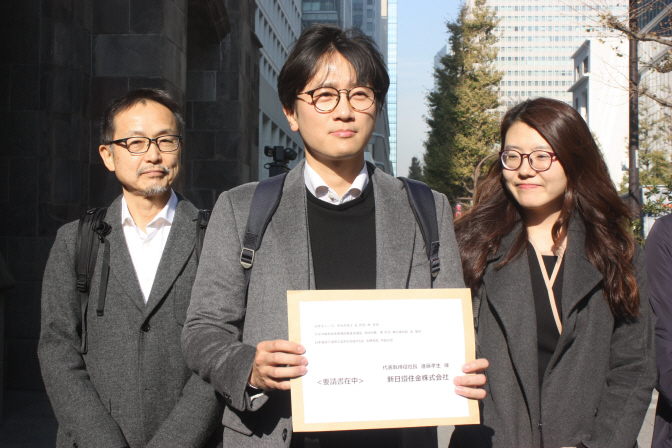 A Japanese activist and two South Korean lawyers representing the four victims of Japan’s wartime forced labor showing a document calling on Nippon Steel & Sumitomo Metal Corp. to carry out the top court’s order to compensate the victims before visiting the headquarters of the Japanese firm in Tokyo on Dec. 4, 2018. (Yonhap)

SEOUL, Jan. 2 (Korea Bizwire) — Victims of Japan’s wartime forced labor have filed for an asset seizure against Nippon Steel & Sumitomo Metal Corp. (NSSM) as the Japanese firm has not carried out the top court’s order to compensate them.

A legal counsel representing the four victims and their descendants has recently asked a local court to seize assets in South Korea held by the Japanese firm.

The subject of the property seizure that the victims asked for is known to be shares of PNR, a joint company between NSSM and South Korea’s top steelmaker POSCO.

The Japanese steelmaker is estimated to hold around 2.34 million shares of PNR valued at some 11 billion won.

It is uncertain whether the asset seizure could be executed.

The legal counsel earlier visited the Japanese steelmaker’s headquarters in Tokyo to deliver a document calling on it to state details about how to carry out the court’s order.

But NSSM has been mum, with a deadline for the Japanese firm to reply having expired on Dec. 24.

The legal counsel and a civic group expressed “strong” regret over the Japanese steelmaker’s insincerity in carrying out the court’s order and its apparent disregard of human rights.

“We also express strong regret over the Japanese government that is publicly dismissing the South Korean court’s ruling and pressing the firm not to follow the order,” they said in a statement.

They called on the NSSM to kick off negotiations with the victims to compensate them.