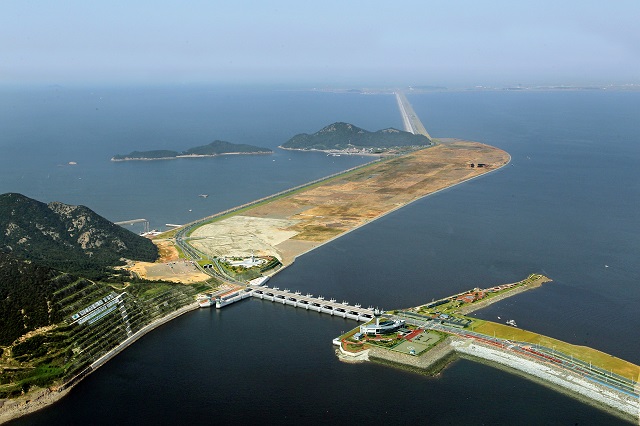 The ministry is striving to induce money from the private sector in the second phase of the project to convert around 400 square kilometers of newly reclaimed land into a multi-purpose city by 2030. (image: Khuncsb/ Wikimedia)

SEOUL, July 4 (Korea Bizwire) – For the ongoing land reclamation project in Saemangeum area in the southwest, the Korean government decided to enlist foreign companies to have the right to develop the reclaimed land and allow the developers to resell less than 50 percent of the land. Currently, the development project for the reclaimed land is exclusively for local governments and Korean companies.

The Ministry of Land, Infrastructure and Transport announced on July 2 the plan to induce more investment in the project among private sector operators and foreign investors. For the plan, the ministry will revise the implementation ordinances of the laws and it will be implemented 40 days after the prior announcement of legislation on the laws. Once the ordinances are revised, foreign-invested enterprises will be allowed to join in the project.

With the plan, the ministry expects more investment from Chinese companies as it plans to allot a China-Korea Common Economic Space in the project area.

The Saemangeum project, filling the tidal mudflat with seawalls with the length of 33.9 kilometers, began in 1991 and the construction of the seawalls was officially completed in August 2010.

The ministry is striving to induce money from the private sector in the second phase of the project to convert around 400 square kilometers of newly reclaimed land into a multi-purpose city by 2030. The ministry expects it will cost approximately 21 trillion won.

However, as the land reclamation project needs a huge amount of money to remove the seawater of the land fully inside the walls, not much investment was made in the project. The government thus allowed the developers to resell the developed land up to 50 percent to induce more investment.

A ministry official said, “As it needs up-front investment to reclaim the land inside the walls, it is needed to make a policy for the developers to divest their initial investment by easing regulation on the reclaimed land. Also, as there are not many local companies which are showing interest in the project, we should open the opportunity to foreign investors for the direct development.”

One thought on “Foreign Investors Allowed in Saemangeum Development Project”