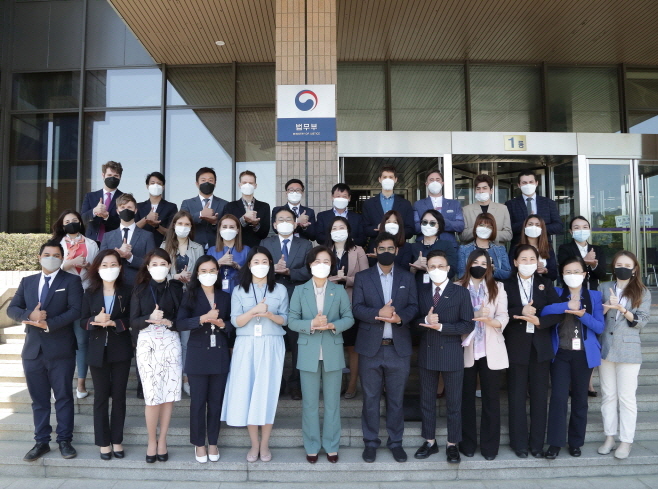 The ‘Immigrant’s Mentor Club for Social Integration consists of 35 immigrants from 22 countries. (image: Ministry of Justice)

SEOUL, May 14 (Korea Bizwire) — The Justice Ministry has announced the launch of a foreign mentors club that will be in charge of sharing insight with immigrants on settling in Korean society, and introducing the culture of other countries to South Korea.

The ministry held a commissioning ceremony for the ‘Immigrant’s Mentor Club for Social Integration’ on Wednesday at the government complex in Gwacheon, south of Seoul.

The club consists of 35 immigrants from 22 countries in Asia, the Americas, and Europe. Television personalities including Julian Quintart from Belgium and Christian Burgos from Mexico were among them.

The club will take on the role of educating fellow immigrants, raising public awareness about policies for foreigners, and introducing culture from their homelands.

The club will also be in charge of documenting feedback during mentorship, and delivering this information to government staff in charge of policies for foreigners.

Since 2009, the ministry has been running the Korea Immigration and Integration Program to teach Korean language and culture to foreigners with a long-term sojourn in the country.

“When I first came to South Korea, the Korean language and culture I learned at the social integration program helped me settle in,” said Sujan Shakya, a club member from Nepal.

“I am grateful to take on the role of sharing that experience with others and contributing to making better policy.”

“Without mutual understanding and exchange between our citizens and foreigners, it will be difficult to achieve true social integration,” said Justice Minister Choo Mi-ae

“As experienced immigrants, I ask you to become a strong bridge for social integration.”