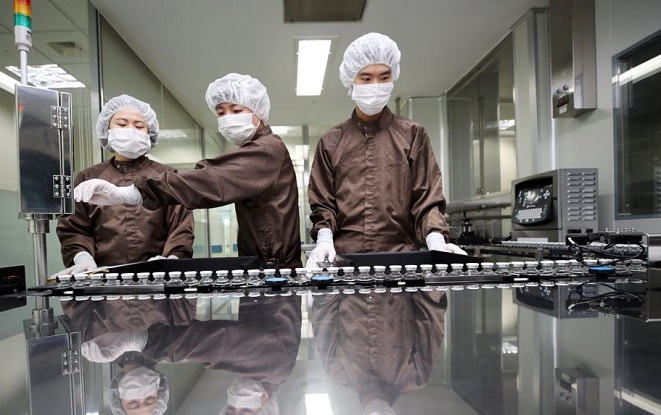 Workers look at bottles of pharmaceutical giant Celltrion Inc.’s COVID-19 antibody treatment, CT-P59, on a production line at a plant in Incheon, west of Seoul, on Feb. 9, 2021. (Yonhap)

SEOUL, Feb. 11 (Korea Bizwire) — Foreign investors raked in bio and chemical shares while dumping chip and auto stocks during the past two weeks of adjustment, putting the key stock index in a tight band.

The benchmark Korea Composite Stock Price Index (KOSPI) has been in a lengthy adjustment period since Jan. 26, after hitting a record high of 3,208.99 points.

Foreigners, whose selling intensified during the three-week period, picked up pharmaceutical heavyweights, such as Celltrion and Samsung BioLogics, and chemical giant LG Chem, according to data from the Korea Exchange (KRX).

During the cited period, they sold a net 5.1 trillion won on the main bourse.