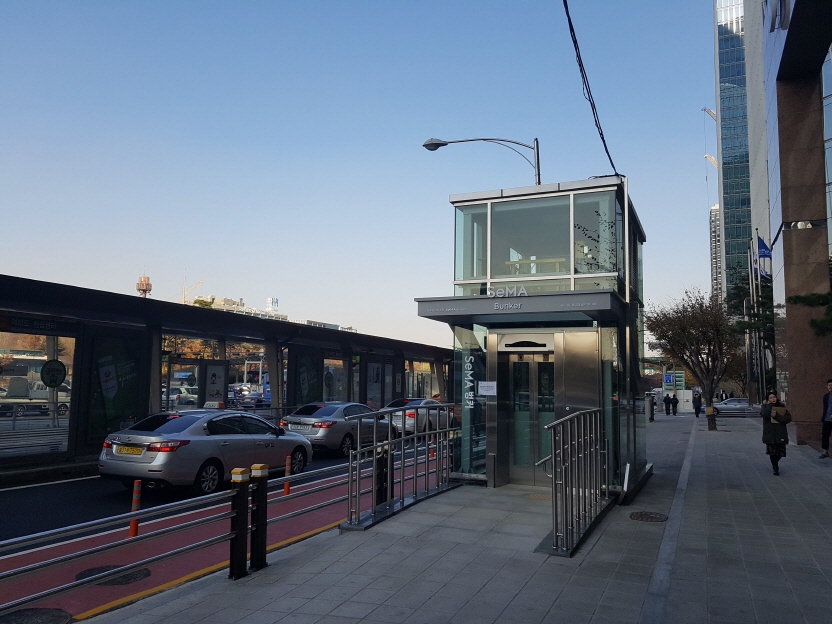 An entrance to the SeMA Bunker near a bus station in Yeouido, Seoul. The former underground bomb shelter reopened as an art gallery in October 2017, 12 years after it was discovered by a construction worker. (image: Yonhap)

SEOUL, Nov. 23 (Korea Bizwire) — For many and for so long, South Korea may have been a must-visit place, as it remains the last front line of the Cold War where hundreds of thousands of troops confront each other along the heavily fortified military border.

But witnessing the true reality of division had never been too easy, at least until last month when Seoul opened a once-forgotten underground bomb shelter to the public.

The subterranean bunker was discovered by chance in 2005 by a construction worker who was working on a new bus station in Yeouido, a financial district and one of the most well-off neighborhoods in central Seoul, according to Song Ga-hyun, a curator from Seoul Museum of Art (SeMA).

Using an industrial endoscope, the workers then confirmed what they initially believed to be a hollow underground opening was in fact a carefully designed bunker.

However, even to date, no one knows for sure how or when the vast underground facility was built.

“We can only conjecture about when it was built, as aerial photographs of the area taken in 1977 show what appear to be doors to the bunker while those taken in 1976 do not,” Song said.

Many, including Song, believe the bunker may have been built for the late former President Park Chung-hee as it sits directly under where Park’s reviewing stand used to be. From the stand, the late former leader could watch ceremonies, such as military parades that were apparently aimed at demonstrating the country’s military power to the communist North.

The bunker consists of one large chamber, nearly 600 square meters in size, and one small room that appears to be designed to accommodate only a few very important persons, at least for a short period of time, as it is equipped with a fully functional toilet and washstand, as well as a sofa.

After nearly four decades, the bunker was opened to the public in 2015. The Seoul city government later decided to turn the Cold War relic into an art gallery. After months of cleanup and renovation, the SeMA Bunker officially reopened Oct. 19.

“It is surprising to see a bunker in Yeouido,” said Jeon Dong-ha, from Bundang, Gyeonggi Province. “I have always thought of Yeouido as a very modern and peaceful area.” 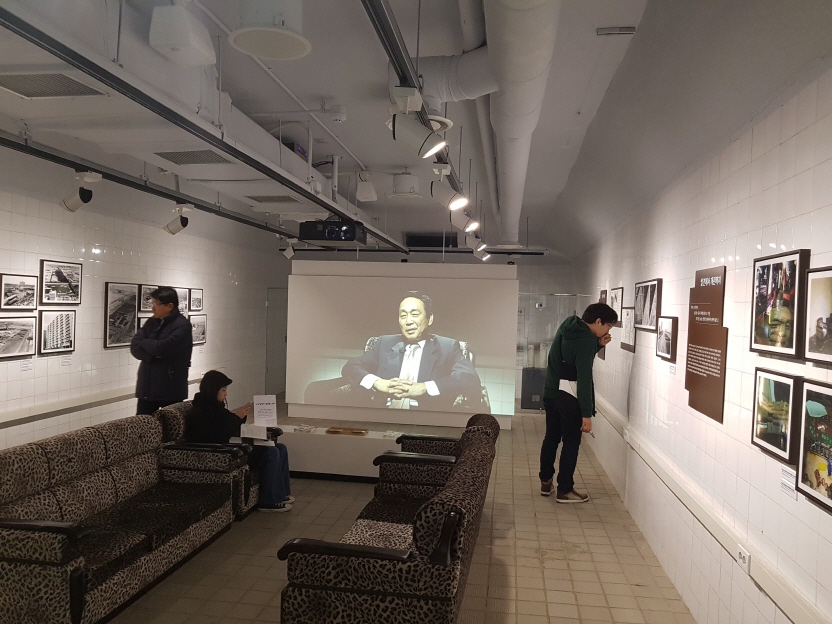 Visitors view what is believed to be a VIP room, possibly built for the late former President Park Chung-hee, at an underground bunker that has been turned into an art gallery in Seoul, South Korea on Nov. 21, 2017. (image: Yonhap)

The 28-year-old parking manager noted the bunker may represent what he called the “insecure” situation his country continues to face, nearly four decades after the country and its leader needed an underground shelter.

“I guess we are still in an insecure condition because we are still at war with North Korea,” he said, noting the 1950-53 Korean War only ended with an armistice and not a peace treaty. “I came with a light heart to see the bunker, but I do not feel all that light anymore.”

Lee So-yeon, a 22-year-old student from Yeoksam-dong in Seoul, said the bunker still offered some peace of mind.

“Physically, it is still a bunker. But I believe it is a good example of how important an idea governing a society is,” Lee said.

“Back when it was built, anti-Communist sentiment was so high that people may have believed the North might actually inflict direct physical harm on us. Now, I believe people think the possibility is very low. I believe the fact that an art exhibition is being held here and now shows such a change in perception,” she added. 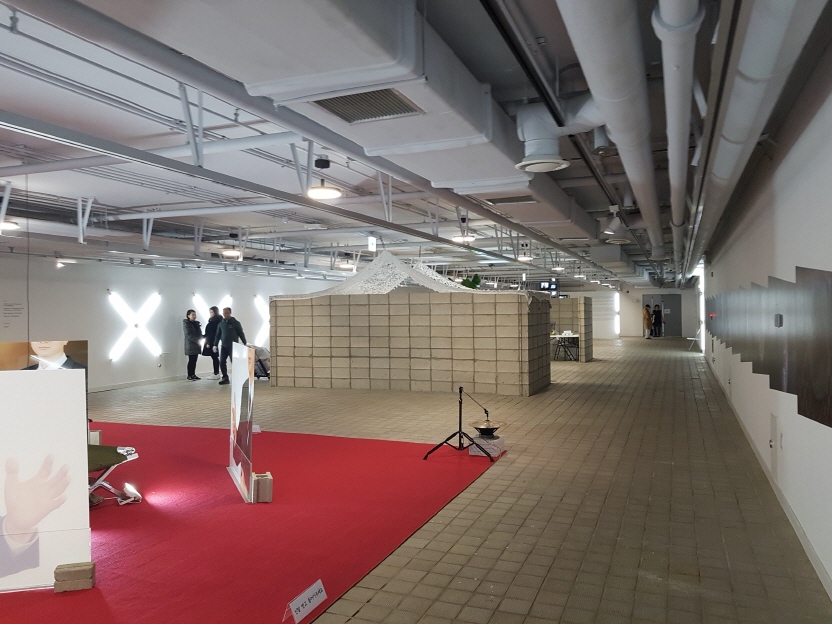 A number of artworks on display at SeMA Bunker art gallery. (image: Yonhap)

To many others, the bunker may still be a reminder of the harsh security condition South Korea faces due to a now nuclear-armed North Korea.

“I once traveled to the Demilitarized Zone to see the tunnels North Koreans dug, which I thought were amazing,” said Christina from Frankfurt, Germany, referring to the massive underground passages North Korea excavated under the inter-Korean border in apparent preparation for a southward invasion.

The 38-year-old, who called herself a bunker fanatic, noted the SeMA bunker offered the same sense of urgency.

“Visiting this bunker is a very unique experience because there are many public shelters, but you cannot go inside any of them,” she said.

“It is amazing to see they take something made for a very dark reason to build a very light place.”

Marcel, 36, also from Frankfurt, agreed it was important to keep the bunker intact, no matter how gloomy its past or reasons for its existence.

“It is important not to destroy part of history,” he said.