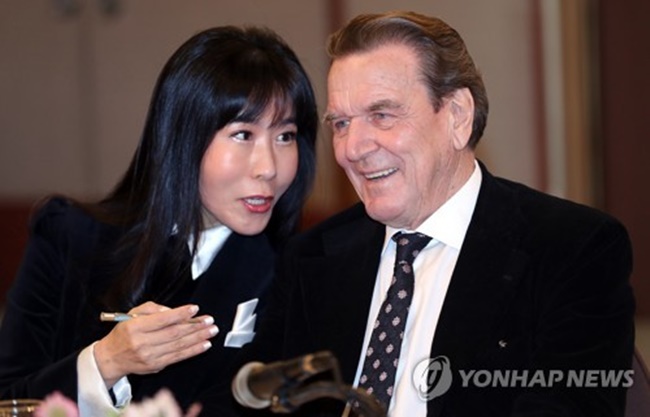 Former German chancellor Gerhard Schroder and his Korean interpreter Kim So-yeon attend a press conference in Seoul on Jan. 25, 2018, to announce their plan to marry within the year. (Image: Yonhap)

Schroder and Kim said during a press conference in Seoul that they are going to marry around this autumn and that the exact venue and time have yet to be fixed.

After marriage, the couple plan to live between Germany’s Berlin and Hanover as well as in Seoul.

The former chancellor said he is looking forward tolearning more about Korea and its history and culture through his marriage life.

It was a “new challenge” and not an easy decision to spend half of his remaining years in Korea, he said, adding that he wants to learn more Korean language and lead a normal life in the country.

The two are known to have met for the first time when Kim served as Schroder’s interpreter during an international business conference about two years ago. The relationship was revealed when Schroder’s estranged wife, Doris Schroder-Kopf, wrote about it on her Facebook account last year. The two then confirmed their romantic relationship through German news media.

Kim currently works as the South Korean representative of the Economic Development Agency of the most populous German state of North Rhine-Westphalia and as Schroder’s interpreter.

During the press conference, the former chancellor said his relationship with Kim has nothing to do with his divorce suit, emphasizing that he and his former wife mutually agreed to the divorce and thus there is no dispute.

Schroder and Kim were to watch the South Korean box office hit, “1987: When the Day Comes,” in the afternoon. On Friday, they will visit the truce village of Panmunjom in the Demilitarized Zone (DMZ), which divides South and North Korea, with German Ambassador to Korea Stephan Auer, South Korean football legend Cha Bum-kun, and their wives. Cha played football professionally in Germany in the 1970s.

Schroder will also attend the opening ceremony of the 2018 PyeongChang Winter Olympics, which is slated for Feb. 9 in the eastern alpine county of PyeongChang, at the invitation of the International Olympic Committee.