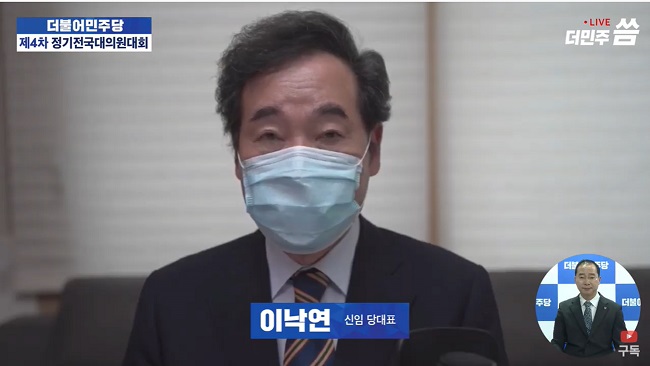 This photo, provided by the ruling Democratic Party (DP), shows Rep. Lee Nak-yon delivering his acceptance speech after winning the party’s chairmanship at a party convention on Aug. 29, 2020.

SEOUL, Aug. 29 (Korea Bizwire) — Former Prime Minister Lee Nak-yon was elected the new chairman of the ruling Democratic Party on Saturday in a party convention held remotely in response to the spread of the new coronavirus.

Lee, now a lawmaker and one of the leading potential presidential candidates, overwhelmingly won the election to head the party, which controls an absolute majority of 176 of the total 300 parliamentary seats, for two years.

“I accept your order (to lead the party) with a sense of heavy responsibility,” Lee said in his acceptance speech to party members and delegates, broadcast from his home in central Seoul.

He mentioned the ongoing COVID-19 pandemic and accompanying economic and social difficulties as the most urgent issues the party is facing now.

“In close cooperation with the government and based on broad public participation, I will work to help (the country) overcome this national crisis better and more quickly,” he said.

The new chairman said he will also consider support measures for people’s livelihood for the upcoming Chuseok traditional holiday, as well as the second round of COVID-19 response emergency handouts, while pledging closer collaboration with the opposition parties.

“I will pour all my efforts … so that I can pave the way for the success of the Moon Jae-in administration and another winning (of the presidency for the DP),” Lee noted. 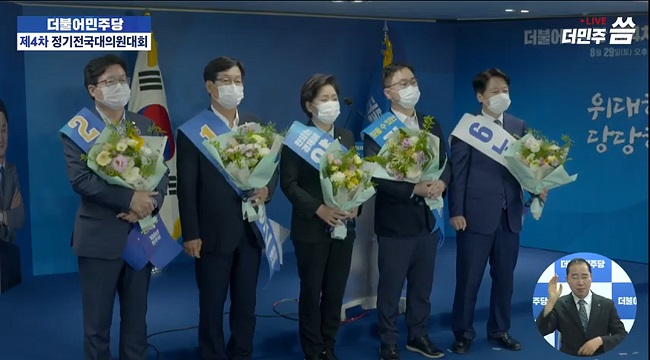 This photo, provided by the Democratic Party, shows the five members of its leadership council, elected at a party convention on Aug. 20, 2020.

Lee’s election victory is expected to boost his potential bid for the presidency. He had been leading the opinion polls of presidential candidates for over a year, before he was overtaken by Gyeonggi Gov. Lee Jae-myung in the latest polls in August.

Addressing the convention in a videotaped message, President Moon Jae-in said the party’s new leadership is tasked with “making the National Assembly an institution trusted (by the people) and promoting national unity in cooperation with the opposition parties.”

“The country needs to overcome the crisis as soon as possible (as it is facing) difficulties due to the resurgence of COVID-19, flood damage and the economic situation,” Moon said.

The convention, held at the party’s headquarters in Yeouido, western Seoul, was attended by only a limited number of party members in person to avert any potential COVID-19 infection risks.

It was initially arranged as a mass event involving hundreds of party members and delegates at a sports arena, but the party shifted it into a virtual, livestreamed event earlier this month in light of the recent surge in virus transmissions in Seoul and the broader capital area.

The simultaneous assemblage on and around the convention stage was kept to fewer than 10 people throughout the event, a standard required under the country’s toughest Level Three social distancing, as precautionary measures. 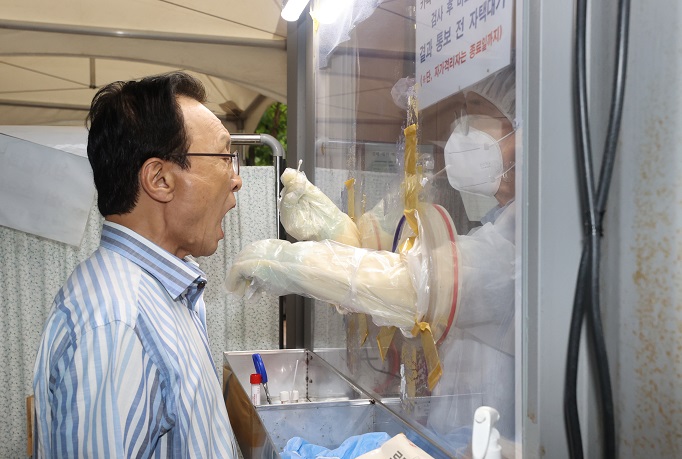 Lee Hae-chan, outgoing chief of the ruling Democratic Party, receives a polymerase chain reaction test at an outdoor clinic in Seoul’s Yeongdeungpo Ward on Aug. 27, 2020, after a reporter covering him was confirmed to be infected with the new coronavirus. (Yonhap)

The convention was also held without the on-site presence of major convention players, including the newly elected Chairman Lee Nak-yon himself, the party’s outgoing Chairman Lee Hae-chan and floor leader Rep. Kim Tae-nyeon.

After coming in indirect contact with a COVID-19 patient, Rep. Lee Nak-yon, was placed under self-quarantine till the end of the month. Having campaigned from home since last week, he delivered his acceptance speech virtually after winning the chairmanship.

Outgoing Chairman Lee Hae-chan and the floor leader have also been under self-quarantine after coming in contact with a photojournalist who tested positive earlier this week.

Both of the party leaders tested negative, but they did not attend the event in person, with the outgoing chairman addressing the convention in a pretaped video message.

The DP has been angling for a major face-lifting effect from the convention, as it is desperately seeking to reboot itself amid low public support ratings for the party.

Stagnating approval ratings for the Moon administration have also been weighing on the party.