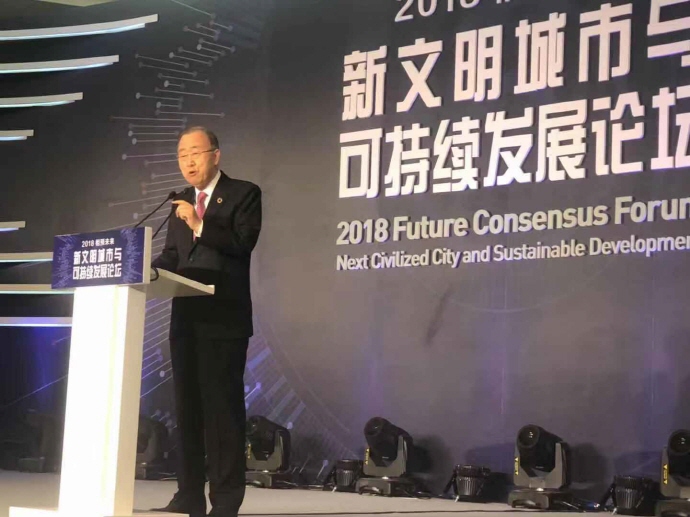 SEOUL, Nov. 5 (Korea Bizwire) — Addressing an audience at an international forum in Beijing yesterday, former United Nations Secretary-General Ban Ki-moon spoke of a new form of city in which work, education and medical services could all be administrated in the convenience of one’s home.

As the keynote speaker at the 2018 Future Consensus Forum co-hosted by the Future Consensus Institute and China’s Tsinghua University, Ban spoke of the need for a new city paradigm as “large cities are not sustainable,” calling for “a new type of city to be created that will help create new civilizations.”

Citing the fact that emissions of greenhouse gases from large cities account for 70 percent of the global total, Ban pointed out that large cities deepen inequality.

And due to the heavy expenses and rent that comes with living in a large city, many creative individuals are leaving metropolitan areas.

The United Nation’s former top chief also stated that people waste one to three hours a day commuting to work as workplace and homes are separated for many city dwellers.

“After the Industrial Revolution, people started commuting to work and traveling to malls to go shopping, but digital technologies have brought work, hospitals, shopping centers and schools within our grasp,” said Ban, who added that our homes will become a new platform in which 60 percent to 70 percent of our work, education and medical activities could be carried out.

In order to create a more sustainable environment in line with the future, Ban called for a new type of creative organization that could transcend individuals, corporations and nations in designing such a city.

Ban also emphasized the role of China in the grand scheme of things, saying that “a new civilization will be born in an Asian city,” with a city in China most likely being that very place.

“China’s change will have a significant impact on the entire world in the future,” said Ban. “Whether or not China can bring about sustainable change will decide the fate of mankind.”