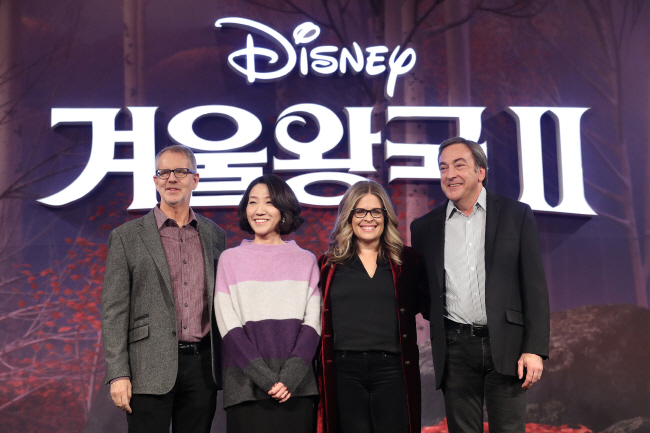 South Korean animator Lee Hyun-min (2nd from L) poses for photos at a press conference in Seoul on Nov. 25, 2019. (Yonhap)

“I think Anna is also a person of great capacity, compared to Elsa who is known to have magical power,” Lee said in a Seoul press conference.

“Anna has extraordinary inner power, like the ability to empathize with others, love and embrace them.”

With the sequel of “Frozen” (2013) smashing the South Korean box office since its release Thursday, the creative minds behind the animated film visited the country as part of a promotional tour.

“Frozen 2″ attracted more than 4.4 million moviegoers over its first four days, including 3.1 million on Saturday and Sunday.

It is about a journey beyond the kingdom of Arendelle three years after the events of the first film.

Lee came to her home country, along with producer Peter Del Vecho and directors Chris Buck and Jennifer Lee.

She is the animation supervisor of the character Anna, who is fearless and faithful as she sets out on a dangerous adventure with her sister, Elsa.

“I tried to focus on this feature of Anna when I discovered her character. Thanks to Anna’s inclusive leadership, Elsa can hit her straps,” Lee said.

“There are leaders who stand at the head of the group, while some leaders are patient and understanding of others. This is who Anna is.”

Lee, who joined Walt Disney about 10 years ago and has participated in a number of famous animated films, including “Zootopia” (2016) and “Moana” (2016), said all characters in the latest film grew and matured from the first series.

“In ‘Frozen 2,’ I wanted to show their multiple aspects and their inner being,” she said. “Elsa, Anna and other characters were family to me.”

Directors of the film also said Elsa and Anna, a typical Disney queen and princess, respectively, are different from the traditional image of a royal family and show their humanity and authenticity that catch the heart of people in the 21st century.

She said “Frozen 2″ pictures the characters’ growth as they accept the change and overcome obstacles of the scary outer world.

“Our characters are growing up. This is the story about growing up, and we know a lot of our audiences also have aged,” Lee said.