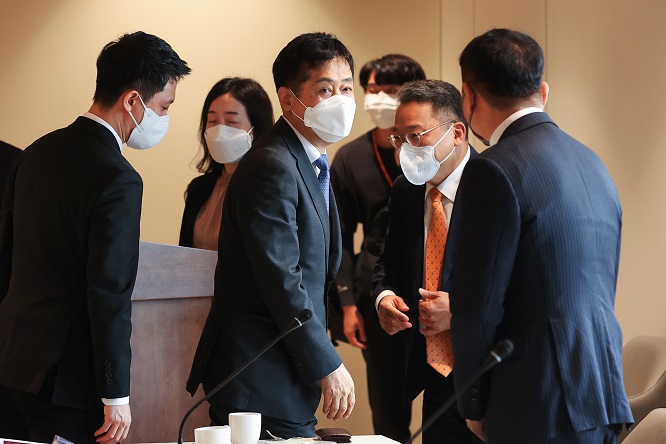 FSC chief Kim Joo-hyeon (C) greets other officials before attending a meeting to discuss deregulation in the financial sector on July 19, 2022. (Yonhap)

SEOUL, July 19 (Korea Bizwire) — South Korea’s top financial regulator said Tuesday it is necessary to ease a rule that restricts industrial businesses from owning banks, saying that such deregulation could generate mega players like BTS in the financial sector.

The government restricts industrial capital from being used to purchase stakes in banks and financial institutions in a bid to make it hard for business owners to take advantage of them as private coffers. Under the rule, businesses can own up to a 4 percent stake in a bank.

“The financial sector should grow into an axis of our economy, and in this process, regulations should not stand in the way,” Kim Joo-hyeon, head of the Financial Services Commission (FSC), told a regulatory reform meeting.

“Financial regulatory reforms are aimed at creating a new field on which such leading players as BTS can be born in our financial industry,” he added.

In particular, he cited the so-called separation of industrial and financial capital as major red tape that hampers financial firms from going digital.

“We will explore ways to improve restrictions on operation areas and investment in affiliates so as to bolster investment in businesses and new technologies related to IT and platforms,” he said.

He also emphasized that the government will make efforts to ease regulations in a way that will allow local financial companies to do anything foreign competitors can, adding that all regulations and practices should be under review for changes.

Meanwhile, as part of efforts to cut down on regulation and bolster competition, the FSC said that it is reviewing various measures that include the introduction of an alternative trading system for the stock market.

The FSC also said that it will look into the possibility of allowing financial companies to deal with operations related to virtual assets, such as cryptocurrencies, in consideration of growing demand from the banking sector.