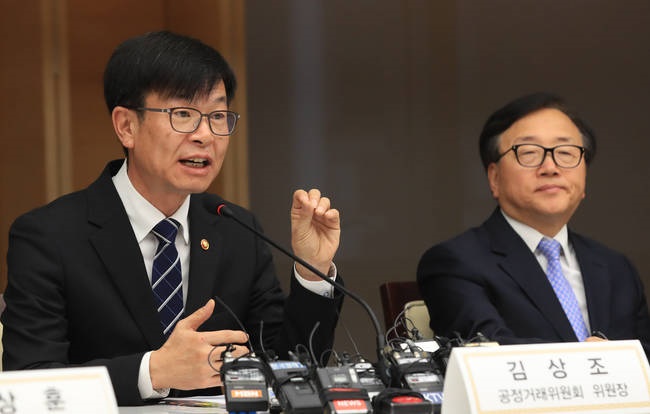 The FTC made the announcement at today’s policy gathering in Seoul with CEOs of five major conglomerates, also known as chaebol in South Korea, including Samsung, Hyundai Motor, SK, LG and Lotte, while urging major companies to do more to reform their corporate structure. (Image: Yonhap)

SEOUL, Nov. 2 (Korea Bizwire) – The head of the Fair Trade Commission, Kim Sang-jo, announced plans to investigate the management of private foundations owned by major companies, as part of efforts to reform conglomerates and improve transparency, during a policy meeting today.

The FTC made the announcement at today’s policy gathering in Seoul with CEOs of five major conglomerates, also known as chaebol in South Korea, including Samsung, Hyundai Motor, SK, LG and Lotte, while urging major companies to do more to reform their corporate structure.

Speaking to the press, Kim raised questions over the willingness of chaebol to cooperate on reforms, saying, “There is still doubt over the companies’ willingness to voluntarily help bring about reforms (to current corporate structure).”

During the meeting, Kim also made public the FTC’s plans to investigate private foundations owned by conglomerates through a special supervisory committee, which will make sure the foundations are being run ethically.

These private foundations have faced criticism in the past over allegations that many are being used as mere tools for corporate owner families to indirectly control their assets, contrary to their original purpose, which is pursuing public interest.

According to Kim, corporate-owned private foundations that meet certain criteria have been given tax benefits, and the FTC is resolute that it will crack down on any unethical activities that go against the original purpose of establishing private foundations.

If necessary, Kim said the FTC will introduce voting right restrictions among shareholders and owner families to reform the current corporate structure in the country.

In addition, holding companies will be examined by the commission to discover possible wrongdoings in relation to consulting commissions and brand royalties, as well as acts of corruption between business partners.

Kim also addressed criticism over being too harsh on businesses, saying the special supervisory committee was launched not only for regulations and investigation, but also to introduce policy and legal reforms to improve transparency.

Prior to the meeting, which was held today at the headquarters of Korea Chamber of Commerce and Industry, Kim met with the CEOs of Samsung, Hyundai Motor, SK and LG in June and called on the companies to set examples for others in helping achieve chaebol reforms.