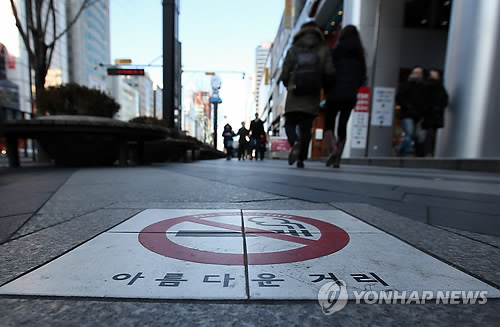 A smoke-free zone on sidewalks along Gangnam Boulevard has been expanded. (image: Yonhap)

Seoul, Mar. 2 (Korea Bizwire) — A smoke-free zone on sidewalks along Gangnam Boulevard has been expanded, said the Seocho-gu office on March 1. The original 943-meter-long smoke-free zone stretched from exit No. 8 of Gangnam Subway Station to exit No. 6 of Sinnonhyeon Station. The district office has designated an additional 555 meters of sidewalk reaching Woosung Apartment Intersection as part of the smoke-free area, elongating the zone to a total length of 1,489 meters.

The newly designated area is one of the most crowded regions within the district, due to the high density of office buildings and numerous bus stops. According to a street survey conducted by the district office at Gangnam Boulevard in January, 76.2 percent of 600 respondents said that they supported expanding the smoke-free zone.