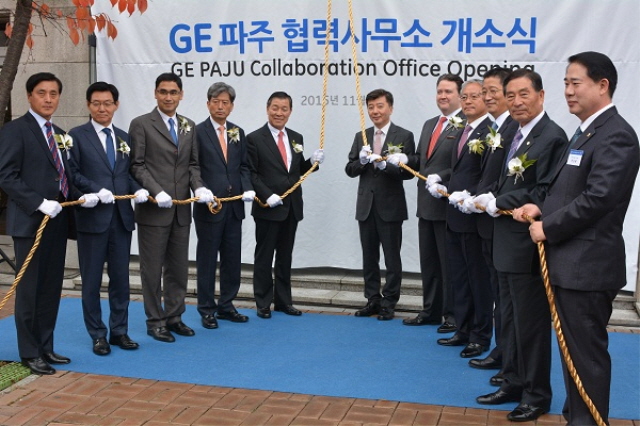 GE held an opening ceremony to celebrate the opening of its office at Paju City Hall near the western border with North Korea. (image: Paju City Office)

PAJU, Nov. 10 (Korea Bizwire) — The U.S. industrial giant General Electric opened a collaboration office in the South Korean border city of Paju Monday as part of efforts to expand business in preparation of the unification of the two Koreas.

GE said it has picked Paju for its growth potential and to help the city resolve the possible electricity shortage in possible unification.

“GE will actively seek more cooperation with Paju city while understanding that the city can develop as an important metropolis in time for the unification,” GE Korea chief said.

The firm also said that it plans to cooperate on projects related to logistics transportation of the northern inland area of Seoul and its surrounding area in Gyeonggi Province.

“GE Collaboration Office will act as a bridgehead of more investment and exchange between GE and the city,” Mayor Lee said.

The opening came after the city government of Paju and the U.S. firm signed a memorandum of understanding on setting up the facility in November 2014.

The idea was proposed when GE Chairman and CEO Jeffrey Immelt visited the country during that time. He expressed hope on finding future growth engines and supporting local firms, as well as exploring ways to step up cooperation.’