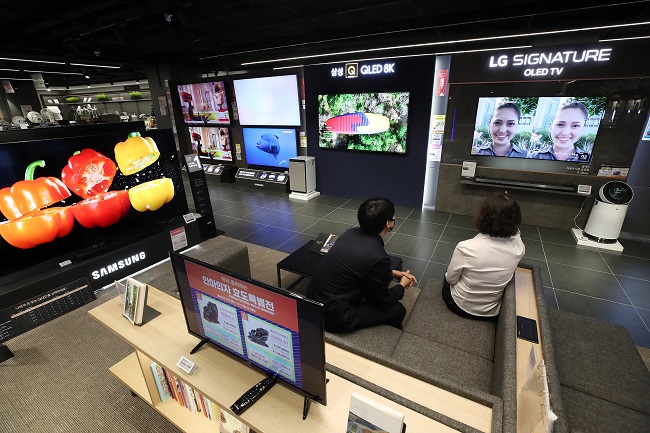 SEOUL, Sept. 23 (Korea Bizwire) — The global TV market is expected to expand in the third quarter of the year due to pent-up demand amid the novel coronavirus pandemic, a report said Tuesday, boding well for South Korean electronics firms.

Global TV shipments in the July-September period were estimated to reach 56.88 million units, up 2.08 million units, or 3.8 percent from a year ago, according to market researcher Omdia.

With the rising stay-at-home trend, countries’ stimulus measures and TV makers’ aggressive promotions are to drive TV sales in the third quarter of 2020, Omdia said.

Omdia predicted that sales of premium TVs, led by South Korean brands, will increase sharply in the third quarter.

Samsung and LG are the top two TV vendors in the world as of the first half of 2020, according to Omdia. Samsung accounted for 31.3 percent of the world TV market in terms of value, with LG taking a 17 percent market share.

Omdia expected global TV shipments to reach 66.43 million units in the fourth quarter with major promotions lined up during the winter holiday season, though the estimated figure is smaller than 68.61 million units sold a year ago.