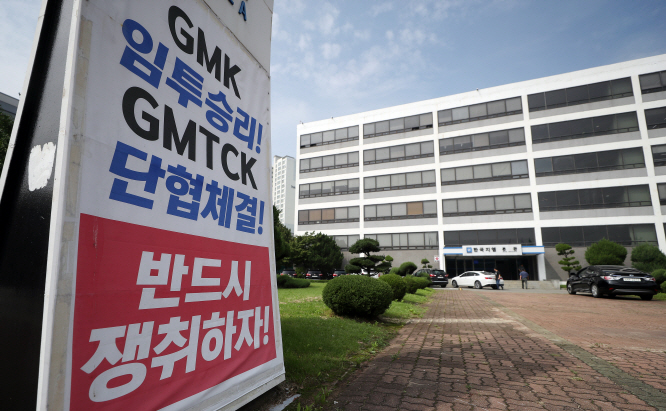 A sign expressing the union’s resolve to win in wage bargaining with management stands in front of a GM Korea Co. plant in Incheon, west of Seoul, on Sept. 9, 2019. (Yonhap)

Unionized workers at GM Korea have held several rounds of partial and general strikes this year through Wednesday for an increase in wages, resulting in over 10,000 vehicles in output losses.

The carmaker’s labor union will decide whether to continue strikes after the Chuseok holiday that begins Thursday and lasts through Sunday, according to the union spokesman Dang Sung-geun.

Analysts expect the GM’s Korean unit will not turn to a profit this year as its vehicle sales also continue to fall.

“The union is fighting for jobs, and the company sticks to restructuring for profits. The two sides appear to be hard to meet halfway for any resolution,” said Kim Jin-woo, an analyst at Korea Investment & Securities Co.

If there are any further general strikes at GM Korea’s plants, the company is expected to report a net loss for a fifth consecutive year in 2019, he said.

The Detroit carmaker launched the midsize Colorado pickup truck in Korea late last month and the Traverse SUV early this month. It is also considering adding the full-size Tahoe SUV to the lineup to meet rising demand for SUVs.

The 10,000-member union demanded a 5.7 percent hike in basic monthly salary, 1 1/2 months of wages in performance-based pay and a cash bonus worth 6.5 million won (US$5,400) per worker, which was rejected by the company.

GM Korea has said it is difficult to accept the union’s requests due to worsening business environments and the fact that the company is still mired in deficits, among other reasons.

The company operates three car assembly plants — two of which are in Incheon, just west of Seoul, and one in Changwon, 400 kilometers south of the capital city.

They have a combined output capacity of about 600,000 units. GM shut down a car assembly plant in Gunsan, 270 km south of Seoul, in May last year due to a low utilization rate.

In May last year, GM and the state-run Korea Development Bank (KDB) signed a binding agreement that will permit a combined 7.7 trillion-won lifeline — 6.9 trillion won from GM and 810 billion won from the Korean policy lender — to keep the Korean unit afloat. GM owns a 77 percent stake in GM Korea.

“Under the agreement, the company promised there will be no forced layoffs by 2028, but it does not have a plan to allocate a new vehicle to the No. 2 plant in Incheon. We believe it will lead to massive layoffs in the coming years. That’s why we lay down our tools,” the union spokesman said.

The company said the allocation of a new vehicle is in line with GM’s global product allocation plan and is affected by demands in each market.