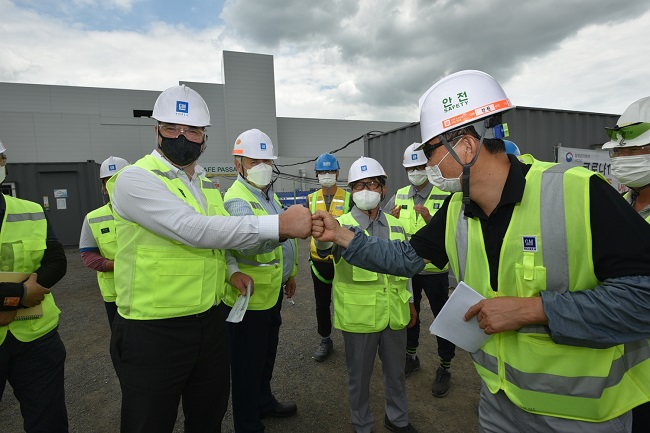 In this photo taken July 1, 2020, and provided by GM Korea, GM Korea President and CEO Kaher Kazem (L) bumps fists with an employee in the carmaker’s plant in Changwon amid the coronavirus outbreak.

GM Korea President and CEO Kaher Kazem reaffirmed the company’s commitment during his visit to the company’s plant in the southern industrial city of Changwon on Wednesday.

“The company plans to invest about 800 billion won in the paint shop and other facilities of the Changwon plant for four to five years (starting in 2019) to produce a new crossover utility vehicle there beginning in 2023,” a company spokesman said over the phone.

In May 2018, GM and the state-run Korea Development Bank (KDB) signed a binding agreement that will permit a combined 7.7 trillion-won lifeline — 6.9 trillion won from GM and 810 billion won from KDB — to keep the Korean unit stay afloat. GM owns a 77 percent stake in GM Korea.

Kazem also shared the company’s current financial status and challenges ahead with employees in the Changwon plant in what appears to be efforts to seek support from the union ahead of negotiations for this year’s wage and collective agreement deal that begins soon.

To revive sales, the company plans to introduce 15 new vehicles in the local market for the five years through 2023.

GM Korea’s Chevrolet lineup is composed of the Spark minicar, and the Malibu sedan; the Trax, Trailblazer, Equinox and Traverse SUVs; the Colorado pickup; the Camaro sports car; and the Bolt all-electric vehicle.

The Bolt EV, Equinox, Camaro, Colorado and Traverse are from the United States, while Damas and Labo commercial vehicles, Malibu, Trax, Trailblazer, and Spark are made locally.